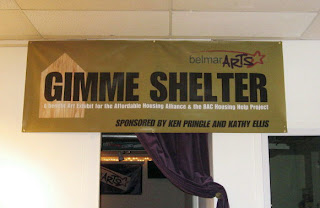 Today was the second day of intake for the upcoming Gimme Shelter exhibition. At the end of the day we had about 90 entries dropped off for the show. Participants started with a piece of shaped plywood (or a free paper template available to students) and the mission to make a statement about the meaning of home. After that it was anything goes, and the artists took the opportunity to explore many concepts and materials.

In addition to being a visually exciting and thought provoking show, it is a benefit for the Affordable Housing Alliance and the BAC Housing Help Project. All of the artwork is for sale, and those not sold during the run of the exhibition will be auctioned off at a future event.

Special thanks to Ken Pringle and Kathy Ellis for sponsoring this exhibition. The BAC is seeking sponsors for several upcoming exhibitions and events. Anyone interested in becoming a sponsor at any level should contact the Belmar Arts Council.
Posted by arrabbiata at 10:35 PM No comments: 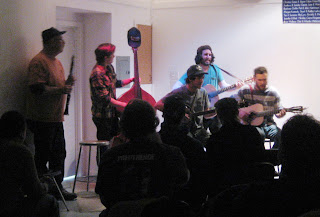 The crowd started streaming in as the band were completing their tuning up. Within a few songs we had a pretty full house, and more were coming in the front door.

Keep an eye on the BAC main website for information about future performance events.
Posted by arrabbiata at 9:50 PM No comments:

Today we had a new event debut at the Boatworks, Asbury Park's Dr. Sketchy. Part figure drawing workshop, part costume party- close to 40 people showed up to take part in the fun.

Dr. Sketchy brings models with costumes and props to fit a particular theme. This time around it was "Soviet Takeover", thus the flags, bits of military apparel, and an interesting variety of prop weapons, as well as modern pop music with an eastern European feel. The organizers also provided refreshments, notebooks and pencils, and prizes awarded by the models after each round of drawing. 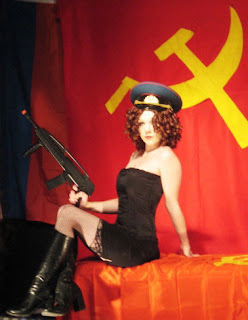 The event lasted about 3 hours. In each of the first two hours we had one of the models taking a variety of 5 and 10 minute poses. During the last hour both models posed together twice for about 20 minutes. 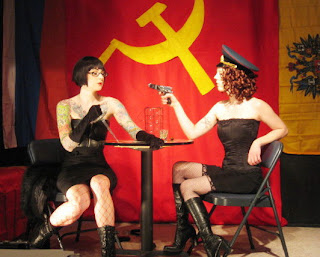 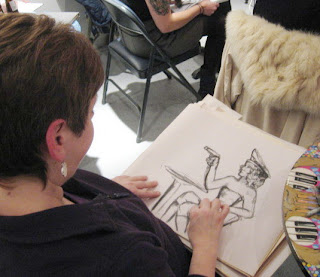 There were some familiar faces in the crowd, working hard with pencil, pastels, charcoal, watercolors, and other materials to rapidly capture a likeness. However, we also had many first time visitors, some of whom were already making plans to come back again. 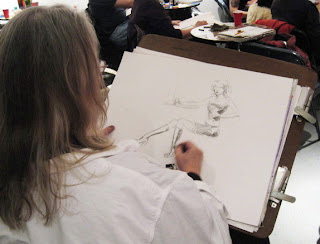 Dr. Sketchy has plans for more area events, with such themes as vampires and ninjas on the schedule. There was talk of a return to the Boatworks in April. When something becomes official, we'll announce it on the main website.

Posted by arrabbiata at 9:46 PM No comments: 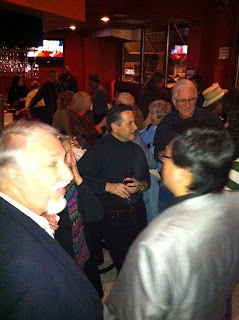 Hot on the heels of our 2012 Member's Salon and Exhibition, the Belmar Arts Council announced there would be another salon in town. However this one was to be a little different. First of all, it was not organized by the BAC, but by the Monmouth County Arts Council. Second, it wouldn't be at the Boatworks, but about 3 blocks away at Nicchio Ristorante, on the corner of 10th and Main. Third, this wouldn't be about presenting artworks, but rather a nice opportunity to meet and hang out with fellow art lovers from the area, and discuss whatever art related issues were of interest.

Because the event was held during happy hour in the bar area of a public restaurant, it's impossible to say how many were there specifically for the art event (as opposed to people there just to enjoy food, drink, and atmosphere), but there were many familiar faces in the dense crowd, along with some people with MCAC name tags. In addition, we definitely had some people who were new to one or both groups and came specifically for the event, so it was a good opportunity for them to learn about some of the many art opportunities available right here in Belmar and our local region. Plus, everyone seemed to be having a very good time, so it looks like it was a successful event.

Posted by arrabbiata at 8:53 PM No comments: 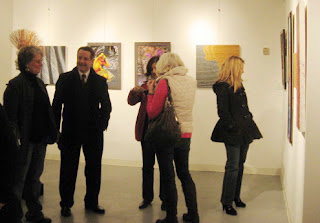 Beginning with the 3rd Annual BAC Juried Art Show in 2007, it has been the custom to award the prize winning artists a whole show of their own. Tonight was the opening for the latest Judge's Choice exhibition, featuring the five winners (Best in Show and four 1st place finishers in their respective categories) from the 2011 show. Artwork filled both the front and back rooms. There were examples of painting, photography, sculpture, and mixed media art. As usual we had a large crowd show up to see the exhibition, which was very well received. 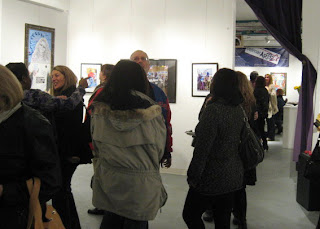 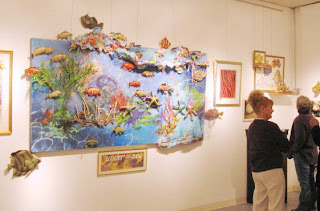 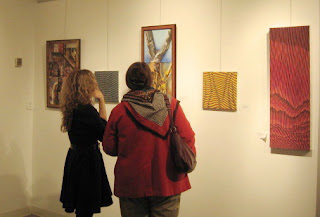 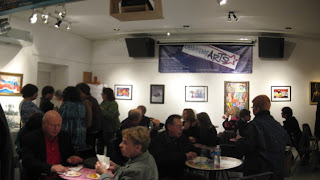 At our receptions, the crowds tend to gather in the larger back room, where we had our cafe tables set up, as well as the food provided by the exhibiting artists. 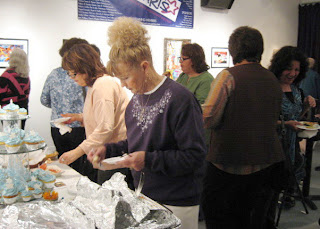 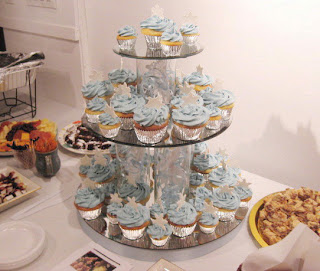 Toward the end of the reception, our new BAC Chairman, Tim McCorry, took some time to discuss some of the upcoming events for spring. There will be another Annual Juried Art Show coming up in April. Even sooner will be our exciting Gimme Shelter exhibition and fundraiser. So far over 70 people have decided to take on the challenge of this project, using the house shaped wood panels as the starting point of an artwork with the theme of home. Work for the show is due in about two weeks, so if you are interested in participating and haven't done so yet, get down to the Boatworks soon and get your house panel. 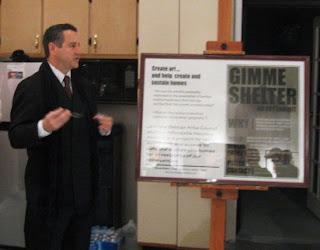 The JAS7 Judge's Choice show will remain on display at the Boatworks during regular gallery hours through February 24, 2012. Admission is free.
Posted by arrabbiata at 10:44 PM No comments: 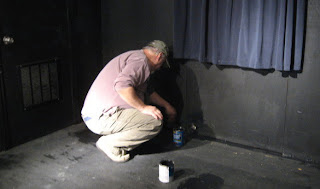 The calendar may say early February, but with this season's mild weather, it seems like the perfect time to do a little spring cleaning. So we put out the call and got more than a dozen volunteers to show up at the Boatworks early this morning and help get the place in shape for tonight's show and other upcoming events. 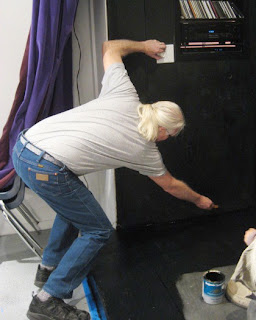 Joe and Hutch helped repaint the whole stage area black, while others used white paint to touch up walls and trim all around the building. Below, Tom puts the lid on the white paint. 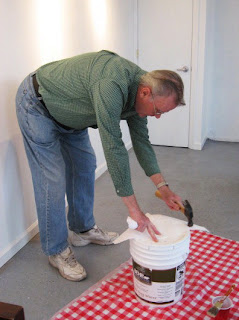 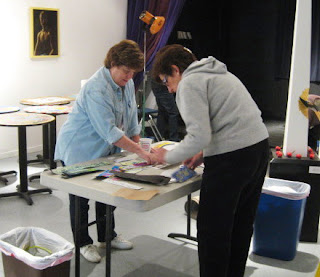 Meanwhile, others helped us bring back a project that goes back the founding days of the BAC. Artistically painted magnetic words that once upon a time were stuck to refrigerator doors on the beach (the legendary "Poemhenge") were sorted to form the original poems (above) and arranged on the steel beam (below) that helps hold up the roof of the Boatworks. 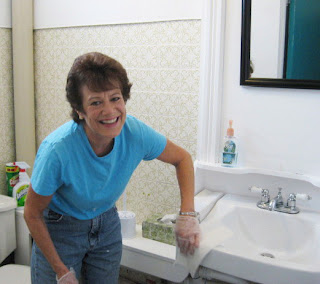 But mostly there was a lot of cleaning going on. The restroom, window sills, counters, tables, etc, all got a good scrubbing. Floors were vacuumed and mopped, made bright and shiny. 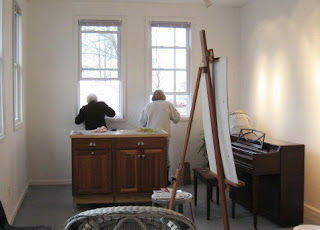 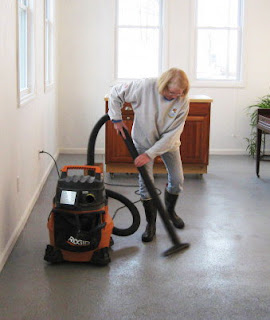 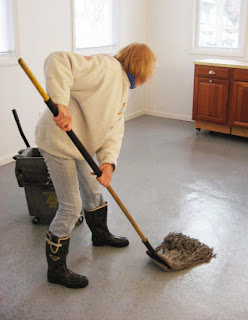 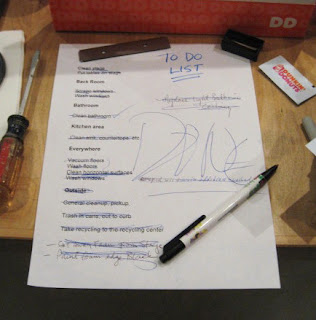 At the end of the morning we realized that the whole list of chores was complete, right on schedule. The place looked great, ready for upcoming receptions, classes, and performances. Scheduled events are all listed on the BAC main website.
Posted by arrabbiata at 10:12 PM No comments: