Last Chance for The Royal Family 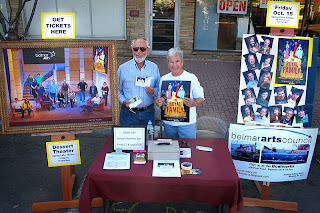 The BAC benefit performance of The Royal Family at the Spring Lake Community House Theater is coming up this Friday night, October 15th. Thanks to the great efforts of BAC members, the performance (and accompanying dessert reception) is almost sold out. As of last night, only 37 tickets remained. So if you've been interested, don't delay- go to our main website and learn how to buy some tickets, before they're all gone.
Posted by arrabbiata at 8:57 PM No comments:

The Mural Capital of the Northeast

Back in 2007, the members of the Belmar Arts Council took a look at the dull gray concrete exterior walls of the Boatworks, our headquarters, and decided that they could use some colorful murals. So that year a group of volunteers put one on the long side of our building, and the following year another group put one on the shorter side. Now it seems like everyone in town wants one, and we're going to try to make that happen. This year the BAC Downtown Mural Project got going, funded by the Belmar Tourism Commission. Four sites were budgeted for this year and we're more than halfway there. The first two are complete, and the third is underway. 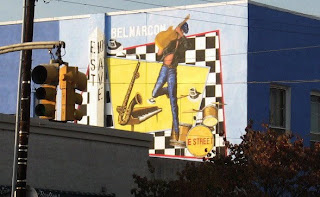 Professional muralist Bob Mataranglo produced the above Bruce Springsteen themed mural on the side of the 2nd floor of the Yarnold Building (near Main and 10th), a spot from which Bruce could look out and see his beloved E Street. Bob was an advisor on our first mural, as well as adding the 3D pieces to both of the Boatworks murals.

Beth Gersten, also a professional muralist, was another major participant on our first Boatworks mural, and this year she painted the large one seen above on the side of the Acropolis Diner (Main and 6th), combining a typical local beach scene and a view through a colonnade of Greek style caryatids. 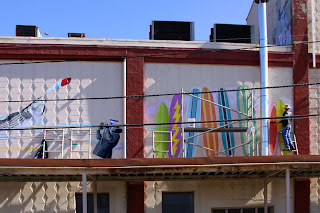 The third Belmar mural is in progress right now. This time around the artist is Jim Fitzmaurice, another experienced muralist and his is going to cover the whole upper half of the back of Freedman's Bakery (Belmar Plaza and 8th Ave). The subject is some of Belmar's annual events, with the surfing competition, St Patrick's Day parade, and typical beach activities showing up so far. Stop by Belmar Plaza in the near future and check on the progress for yourself. 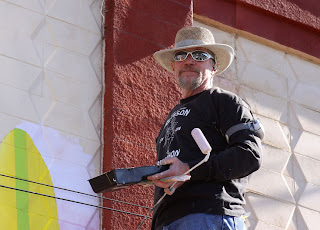 As for the 4th mural, negotiations are in progress right now for a spot further down Main, one that will be painted by BAC volunteers. And the plan is for this series of Belmar murals to be an ongoing project, so look for news about more to come in 2011.
Posted by arrabbiata at 8:00 PM No comments: 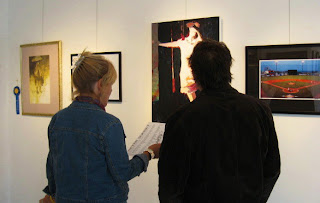 This afternoon the Boatworks hosted an opening reception for the new After Sunset exhibition. The show includes 35 artworks with the after sunset theme, in such media as painting, prints, drawings, photos, and sculpture. On a day when the beautiful autumn weather could be a distraction we had about 40 people come out to see the show. 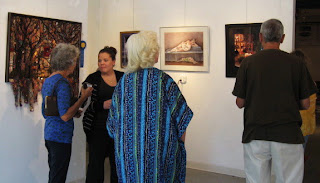 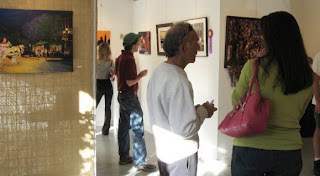 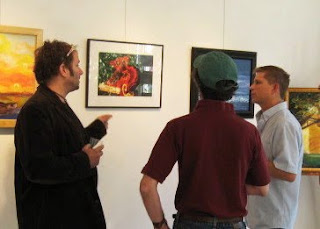 The reception included a special seasonal treat, apple cider donuts, as well as live music from Tom and Gypsy Dave of the BAC jam band. 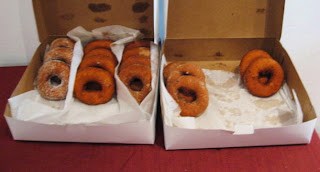 Belmar based professional photographer Steve Lacko was the exhibition juror, and he chose 4 artworks to receive awards: 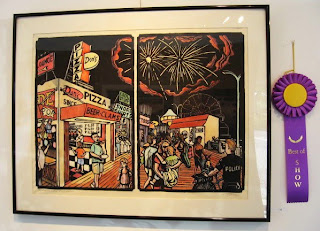 Best of Show
The Floating World: After Sunset
Paul Bonelli 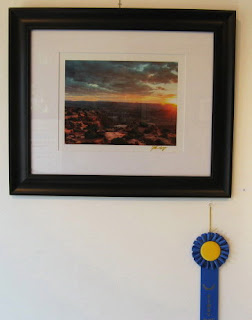 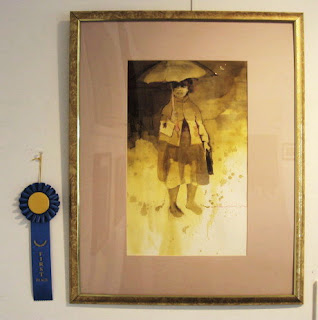 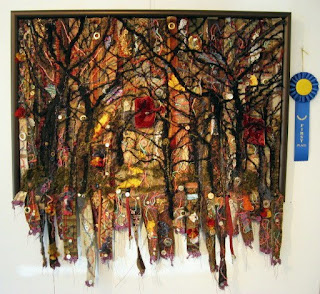 First Place, 3D Art
Mystery Woods
Andree Herz
The After Sunset exhibition remains on display during gallery hours through November 5, 2010. Admission is free.
Posted by arrabbiata at 8:45 PM No comments:

Summer's Over, But Arts Go On

It's getting a bit chilly to be hanging out on the beach these days, but there are still plenty of arts related reasons to come to the Belmar area. 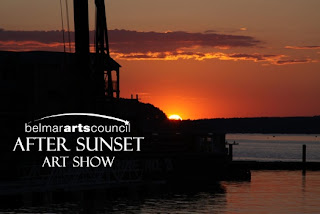 The latest exhibition in our gallery space at the Boatworks is called After Sunset, featuring art with an evening theme. The opening reception is Saturday October 9th from 3 to 5 pm, and the work remains on display during gallery hours through November 5, 2010. Admission is free. 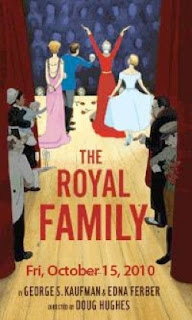 The BAC is presenting a performance of The Royal Family at the Spring Lake Community House on Friday, October 15, 2010. The play was written by George S. Kaufman and Edna Ferber and is directed by Doug Hughes. The evening begins with a dessert bar at 7:00 pm, with the play itself beginning at 8:00 pm. Most of the tickets have been sold, but some seats are left. Prices (which include the dessert bar) are $28 for adults, $26 for students and senior citizens, and $20 for children under 12. Tickets may be purchased at the Boatworks or through the BAC main website, with 100% of the money from the October 15th performance going to benefit the Belmar Arts Council. The Spring Lake Community House Theatre is at 300 Madison Avenue in Spring Lake, NJ.

Plus we have a wide variety of art classes and groups going on at the Boatworks. Just stop by the main website to see what we have to offer.
Posted by arrabbiata at 6:41 PM No comments: