Spring is still taking its time getting to the Jersey Shore, but at least we had a clear day for our 9th Annual Jersey Shore Juried Art Show.  Plus a bonus- the major paving project that has kept our grounds in a muddy turmoil for the past few weeks has been completed enough that we had dozens of paved parking spaces available for visitors to the show. 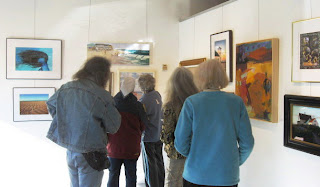 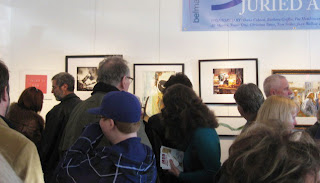 The Jersey Shore Juried Art Show is the longest tradition we have at the BAC, even predating our time in the Boatworks.  It's also our most popular show every year in both submissions and attendance.  Hundreds of people came through the building during the two hours of the reception. 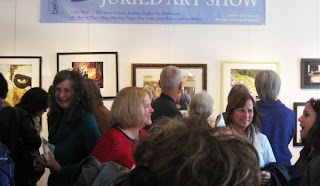 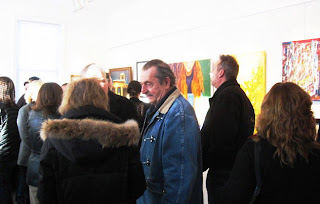 For the first time since last fall we had all three galleries available for the exhibition, space needed to display the 89 artworks chosen by juror Kay Stables of Goldsmith's College, University of London. 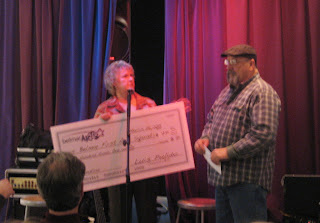 Before presenting the prizes to the artists chosen by the juror for awards, we had a bit of leftover business from last year.  Our last show before Hurricane Sandy was Art for Autism, still on the walls when the storm arrived.  The exhibition not only provided a location to exhibit work created by participants in last year's Beach Bash event, but was a fund raiser for the Belmar First Aid Squad, thus that giant check shown above. 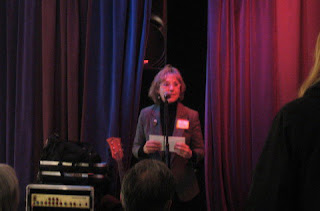 After that, exhibition chair Pat Hutchinson announced the six winner from this year's show: 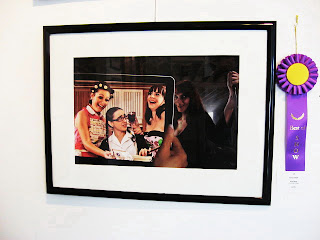 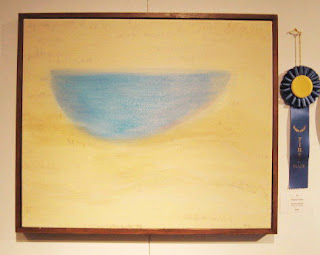 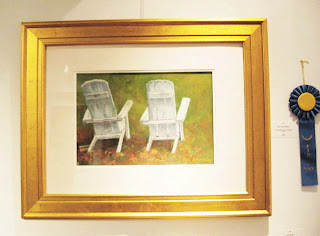 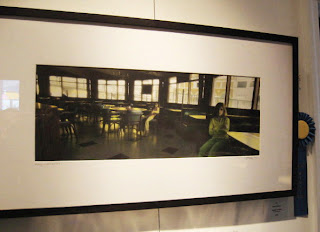 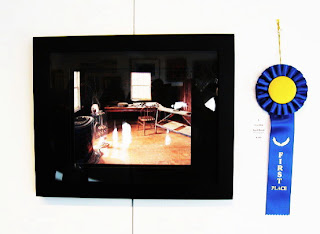 Besides the honors and ribbons, the six award winners will share a whole exhibition just for themselves early next year.

The 2013 Jersey Shore Juried Art Show will be on display at the Boatworks through May 3, 2013.  Gallery hours are Wednesday to Saturday, 1 to 5 pm.  Admission is free.

Posted by arrabbiata at 11:44 PM No comments: 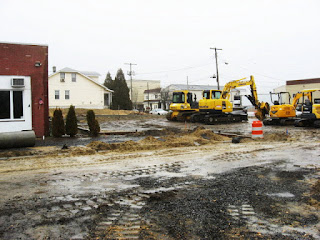 On Wednesday morning, the list of chosen artworks for this year's Jersey Shore Annual Juried Art Show was announced on our main website.  The juror chose 87 pieces, a mix of paintings, drawings, prints, sculptures, and fine craft items.  Winners in the categories will be announced at the opening reception on March 23rd.

Having chosen 87 pieces, a number a bit larger than that were rejected from the show and should be picked up as soon as possible.  Artists should arrange to pick up their pieces on Thursday March 14th between 1 and 5 pm, and Friday March 15th between 1 and 7 pm.  A small fee will be charged per day after that for unclaimed work, so try to get there by Friday. 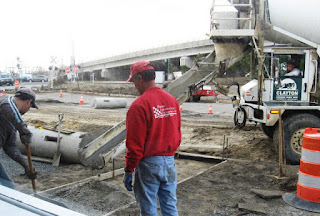 If you have not been to the Boatworks since dropping off your work by this past weekend, you may be in for a bit of surprise.  The street and parking lot reconstruction that has been going on for the past month or so kicked into high gear this week.  Our block is a wide swath of mud and construction vehicles right now, leaving very little parking near our building and a convoluted path to our front door.  We are told that this will all be finished well before our opening reception on March 23rd.  You can still get to the building for the next few days, but you should allow yourself a little extra time to find parking and wear shoes suitable for walking across the dirt and mud.
Posted by arrabbiata at 9:00 PM No comments: 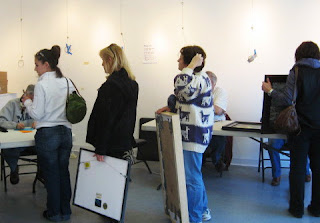 The show of award winners from last year's JAS8 just came down yesterday, and moments later, the artworks for the JAS9 started arriving.  That continued for a few hours this morning and afternoon.  With this show, the BAC has added an innovation- artists can preregister and prepay online before arriving at the Boatworks.  And many had done that this weekend.  They still had to show up to bring the actual artworks, but they got to skip the first table and maybe some steps at the second.  For those who still wanted to go the traditional way, we had that option; we had a couple of computers set up so that our volunteers could enter the information directly into the computer, rather than write it on paper first and have to copy it later.  This system doesn't automatically count the number of pieces that came in, but our estimates were that we had at least 200 works dropped off over the two days.

Early next week our juror, Kay Stables of Goldsmith's College, University of London, will select the work that will appear in the show, as well as the award winners in six categories.  The list of works chosen for the exhibition will appear on the BAC main website starting some time this Wednesday, March 13, 2013.  Artist should pick up the rejected works between 1 and 5 pm on Wednesday and Thursday, and 1 and 7 pm on Friday, March 15th.  The show officially opens with a reception from 5 to 7 pm on Saturday, March 23, 2013.

Posted by arrabbiata at 10:16 PM No comments: