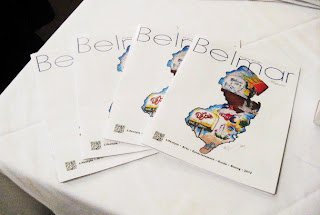 Tonight the Belmar Tourism Commission put together a "Belmar Art Party" to celebrate the launch of the 2012 Belmar Magazine. The full color magazine includes information about many of the entertainment opportunities in Belmar this year, including all the major festivals. The Belmar Arts Council has a nice 2 page spread, with dates for all of the 2012 shows and a nice piece about our murals all around town. 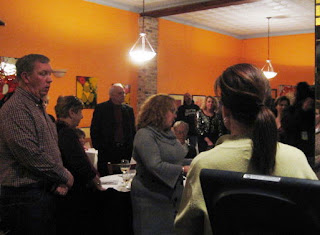 Mary Brabazon (above center), executive director of the Belmar Tourism Commission welcomed us all to the party, hosted downtown at Brandl, a longtime friend of the BAC. A nice crowd (below) showed up to discuss the magazine and upcoming Belmar activities, while enjoying some very tasty hors d'oeuvres from Brandl's kitchen. 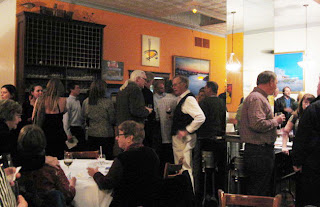 The magazine is available free of charge and should be available soon in locations all over town.
Posted by arrabbiata at 10:00 PM No comments: 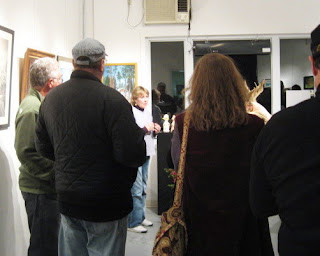 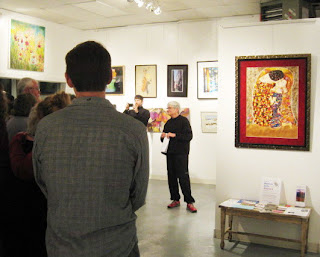 Tonight the BAC held its latest Salon event. We do these about once a year or so- members are invited to place a work of their choice in a show, and instead of a standard reception, each exhibiting artist is given a few minutes to present the work to the crowd and take questions. We have a very diverse group of visual artists, and so there is much information to share about technique, materials, and approaches to art. The show in the front room gallery has 38 artworks on display, a mix of paintings, drawings, photographs, sculptures, prints, and ceramics. Tonight, 26 of the exhibiting artists were present for the Salon, including a few new members. If you weren't there tonight, you still have a few weeks to check out the show, which will remain on display (along with a bonus 25 artworks in the back room from the same artists) during regular gallery hours through January 27, 2012. Admission is free.
Posted by arrabbiata at 11:19 PM No comments:

The art just never stops at the Boatworks. The BAC has a full slate of shows scheduled for 2012, many opportunities for artists to exhibit their work. The first one coming up is the annual Members' Salon exhibition. Members were invited to submit a piece or two to be installed in our gallery spaces. One from each artist (about 3 dozen people submitted artwork) will hang in the front room, and any artists who contributed a second piece will have it hang in the back room. The show opens this Thursday, January 12th at 7 pm. After a brief monthly member meeting, we will hold the Salon event, in which artists in the front room may present their works and take questions and comments about them from all those in attendance. Above is a photo from last year's Salon, and more images can be seen here. The Members' Salon exhibition remains on display through January 27th during regular gallery hours. 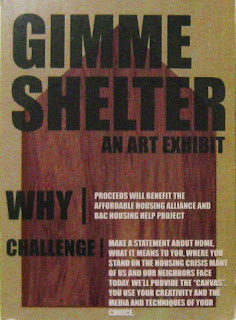 The next opportunity for BAC members and other community artists of all levels of experience is Gimme Shelter, an art exhibit that will benefit the Affordable Housing Alliance and the BAC Housing Help Project. For their entry fee, participants will receive an 8.5" x 12.5" lauan wood panel in the shape of a house (as on the above card) to use in the creation of their artwork. These wood panels can be picked up at the Boatworks during open gallery hours. Intake of the finished entries for the show will be on February 24 and 25, 2012, so don't wait too long to get your "canvas" and get started. Full details and rules for the show can be found on the BAC main website.
Posted by arrabbiata at 11:38 PM No comments: 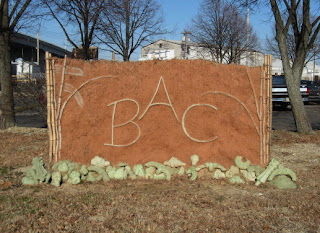 A whole bunch of BAC members and community volunteers put time in this past summer on the creation of a freestanding mural made mostly of bamboo, straw, and mud. We finished it last July, with the understanding that eventually the elements would break it down. That eventually hasn't come nearly as fast as we expected. About a month after completion, it was hit with a double whammy- the biggest earthquake east of the Rockies in more than a century, and Hurricane Irene. Other than losing a little of the green paint on the surface, no visible damage. Over the 4 months since then, Belmar has seen plenty of rainstorms and coastal winds, and outside temperatures have ranged from highs in the 90's to single digit wind chills. Yet the wall is still in very good shape. These photos were taken today. From a distance (above), it looks pretty much the same as it did last summer. 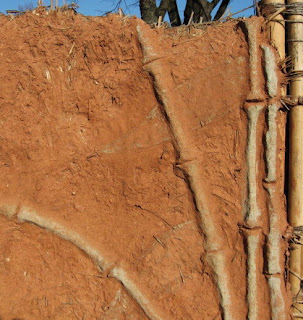 These details show some of the weather effects so far. Most of the green paint that once covered the large leaf shapes (above) on the right side has worn off, though the incised contour lines are still visible. On the left side of the mural, more of the straw layer is visible than could be seen over the summer, and there is a significant surface crack (below) forming between the B and the A. 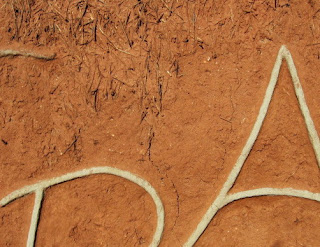 Despite these changes, it doesn't look like our mud wall is in any danger of crumbling in the near future. To follow the status of our mural, check the blog for the occasional update, or just stop by the Boatworks during daylight hours and see it for yourself.
Posted by arrabbiata at 11:10 PM No comments: