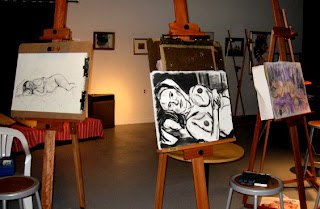 Tonight was the latest meeting of the figure drawing group at the Boatworks. The five artists had a good time working from the model, using such media as pencil, charcoal, pastels, and watercolors. No instruction, just drawing. We began with 1-2 minute gestures, gradually lengthened the poses to 10-15 minutes, and finished with a 45 minute pose, examples of the last shown above. The group meets alternate Wednesdays at the Boatworks, with the next meeting on August 13, from 7 to 9 pm.

Posted by arrabbiata at 10:39 PM No comments: 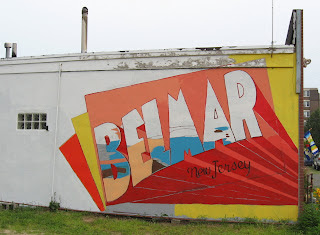 Work on the new mural continued in the early evening. One of our intrepid teen artists from the morning session was back, brightening some of the colors, as well as using her skills to refine the letters in "New Jersey". Two of last year's mural veterans were also on hand, working on various parts of the composition. Painting on the new mural resumes on Friday morning at 8:00 am, at which time we should have the promised scaffold that will allow us to work on the upper part of the postcard. Further meeting times will be posted later.

Posted by arrabbiata at 10:30 PM No comments: 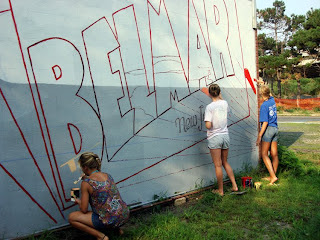 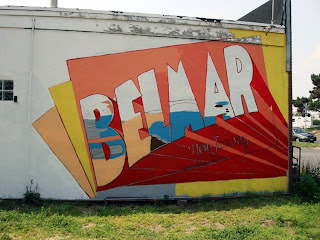 Early this morning the new mural got a lot more colorful. With the help of four talented teen artists, a lot of the big color areas were blocked in, and they even got started on the scenes inside the letters. It won't look like this for long, because painting will resume at 5:00 pm tonight. If you want to be part of this year's mural, don't delay- get here and grab a brush.

Then stick around, because we have the figure drawing group tonight from 7 to 9 pm. Draw/paint from a live model. Bring your preferred materials (pencils, charcoal, ink, watercolor, pastels, etc) and $10 for the model fee; we'll provide the easels, the model, and the space. Open to all artists over age 17. No instruction, just open studio time to work from a model.

Posted by arrabbiata at 3:13 PM No comments: Last summer we put a lot of work into creating a large mural for the south side of the Boatworks. Now we're ready to begin one for the north side of the building. A design was selected, based on a "Greetings from Belmar" postcard. A grid was drawn on the blank wall. Today the process really got rolling, with the basic composition painted on the wall by Pat and Hutch, as shown in these photos they provided. The last photo shows the results.
We've gotten another donation of paint from Siperstein's (who provided all the paint for last year's mural), and we're expecting a scaffold to be installed tomorrow. Volunteers start filling in the colors and details on Wednesday. There will be a group meeting to paint on Wednesday July 30 at 8:00 am and again at 5:00 pm, weather permitting. Anyone interested in being part of the new mural should come by at those times. Bring clothes suitable for painting.
Check back on the blog for information about future meeting times for painting, as well as updates to our progress.

Posted by arrabbiata at 9:49 PM No comments:

How To Paint A Mural As we are now starting a new mural on the north side of our building, it seems a good time to show some of the work that went into the south wall mural, completed during the summer and fall of 2007, before the start of this blog. Once we selected a design (by Pat Hutchinson), the wall was primed and a grid painted on. Still on ladders, we roughed in the basic design for the area above the water level. The scaffold arrived, making it easier to proceed on the upper half. The next step was to block out some main compositional elements, using pale yellow and various shades of blue.

After that a wider variety of color was introduced. The architectural details got filled in, including a lot of buildings in the deep background under and between the bridges.

The final addition to the upper level was the three dimensional pieces created by Bob Mataranglo. After the scaffold was removed, we finished the lower half. First we created a watery deep blue background to represent the area under the water of the Shark River inlet. All kinds of undersea life was painted in, much of it inspired by suggestions from the Belmar community.

The last photo (click on it to enlarge and see the details) shows the final results, a beautiful mural depicting the view over the Shark River, and what we imagine lies beneath.

Posted by arrabbiata at 9:07 PM No comments:

Summer Film- On The Town 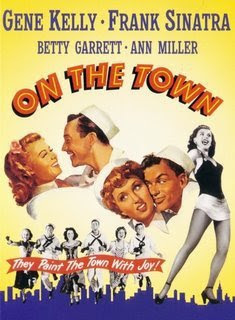 Next up in the BAC Summer Film Series is On the Town, the 1949 musical starring Gene Kelly, Frank Sinatra, and Ann Miller. Adapted from the Broadway production, it includes dance numbers filmed on location in New York City, that wonderful town where the Bronx is up and the Battery's down- see, you even know some of the songs. And shot in Technicolor, too. Come see it at the Boatworks on Wednesday, July 23, at 7:00 pm. Film and air conditioning are free.
Posted by arrabbiata at 9:54 AM 1 comment: 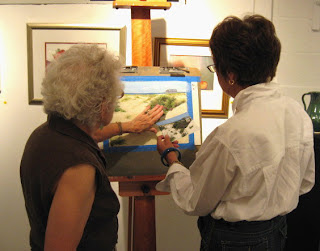 Tonight was the latest meeting of the Fine Arts Critique Group. A small crowd, but we had some good discussion going regarding the works presented by the artists. Most of those who have attended over the past few months have brought works in progress (such as the one seen above), and received many useful suggestions as to how to resolve them. It's a great opportunity to get feedback on your work from experienced artists, and it's free. The group always meets the 3rd Thursday of the month- next meeting August 21, 2008.

Posted by arrabbiata at 10:14 PM No comments: 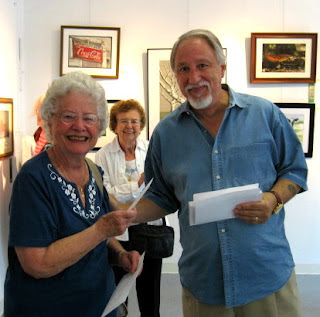 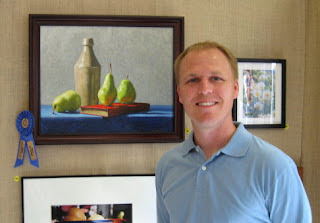 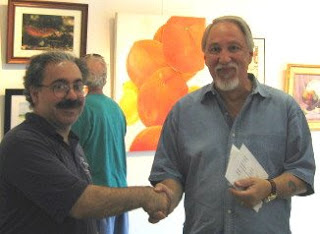 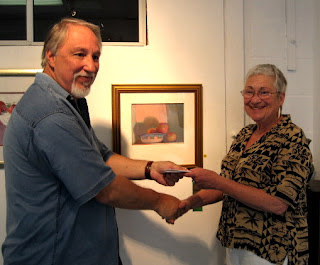 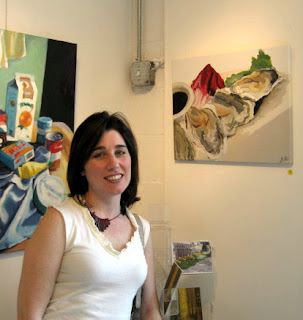 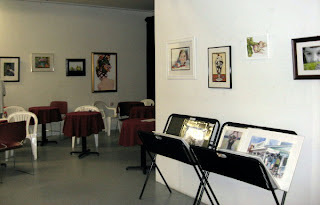 We had a nice turnout for today's reception at the Boatworks. This is the Food For Thought exhibition, featuring art with a food theme. In honor of that, half of the proceeds from the show will be donated to the Belmar Methodist Food Pantry. The first photo shows Joe Villa presenting Bunny Poland with a check for over $300, with possibly more to come from sales of work from the exhibition. Joe also presented awards for Best in Show to Trevor Bryan for his oil painting Pears with Red Book, and to some of the other winners for best in category. As a bonus, the best work that was not included in the main show was hung in the back room, a Salon Des Refuses of food themed art.
The exhibition is open to the public from 1:00 to 5:00 pm, Thursday to Sunday through August 2. Admission is free.
Posted by arrabbiata at 11:17 PM No comments: 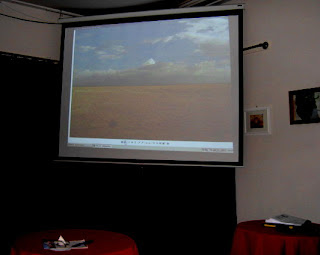 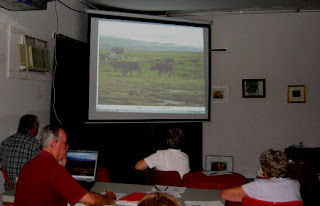 Tonight was the monthly members meeting of the Belmar Arts Council. Among the topics discussed were:

* The Food For Thought Exhibition. The reception is Saturday, July 12, 4 to 7 pm.

* The current summer film series. Next up is On The Town, starring Gene Kelly and Frank Sinatra.

* New mural on the north side of the building will start later this month. More details to follow.

Also discussed were the teen music workshops, the plein air group, and suggestions for some future programs.

In addition, we had a presentation from Tom Volker, who used the digital projector to show photos of his recent trip to Africa, a journey from Cape Town to Cairo. The above photos show typical scenes from his photo journal.

Starting on Thursday, July 17, the Boatworks will be hosting a new series of workshops for teen (13 and up) musicians. The sessions will be facilitated by Patrice Malone, who will use her experience in music theory and composition to provide guidance in this informal setting. Bring your instruments, get feedback, collaborate. Every Thursday from 4:30 to 6 pm, through August 7. All skill levels welcome. A great opportunity for those with musical talent and interest, and it's free.

Summer Film- Tarzan and His Mate 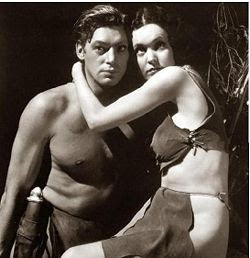 The next movie in the BAC Summer Film series is Tarzan and His Mate, showing at 7 pm on Wednesday July 9 at the Boatworks. The 1934 film stars Johnny Weissmuller and Maureen O'Sullivan as Tarzan and Jane. Lots of jungle fun. Admission is free.

Posted by arrabbiata at 10:33 PM No comments: