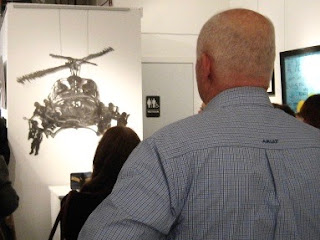 Big crowd in Belmar tonight for the Salon event and opening.  The new show is called Themeless, and the more than 60 works reflects that, in the sense that there is no common subject or medium.  This collection of member art includes a wide variety of paintings, photographs, sculptures, prints- little in common with each other except for being enjoyable artwork.  Well before the official start time a huge crowd was gathered to see the show and learn more about the art and artists.  That information would come from the artists themselves. 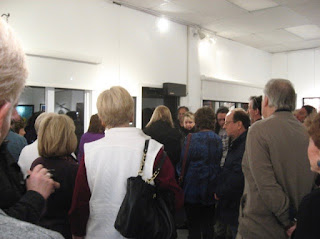 The event commenced at exactly 5:30 pm as planned.  Each artist present was given a few minutes to talk about their piece in the show- to tell about inspiration, process, tools, whatever they felt was important to share. 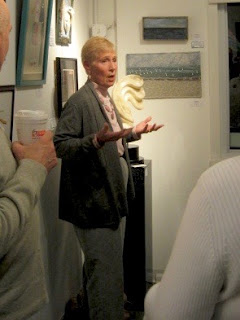 We had 44 of the artists in the show present tonight and talking about their works.  Some brought other people with them as well.  As the photos show, it was a pretty packed house.  But it was all handled with efficiency, and we got through everyone in about an hour. 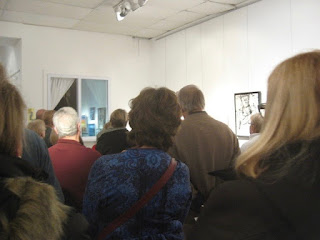 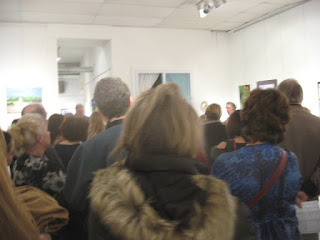 After the Salon event was done, people were welcome to hang around, continuing to view the work, or asking more questions of the artists.  The bulk of the work looked at tonight is in the front room gallery, but some artists put a second piece in the show and these are in the back. 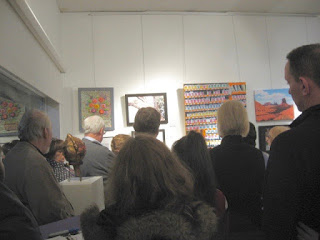 This Themeless Salon remains on display through February 17, 2017 during regular gallery hours.  Admission is free.

Posted by arrabbiata at 9:53 PM No comments:

New Space at the Boatworks 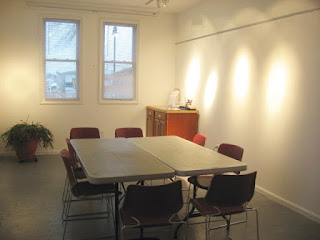 Things were semi-shut down around here for a few weeks around the New Year, and that quiet time was used to get some work done on the building- painting, etc.  A few bigger changes, too.  The side room that has served a number of functions since we built it (most recently Rebecca's office) has now   been rededicated as a classroom/workshop/meeting space, allowing simultaneous functions in the back without people being disturbed by the sound of the furnace. 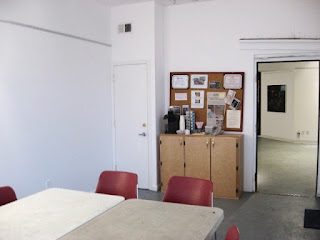 The room is ready to go and open for business.  Check it out next time you are in the building.

Posted by arrabbiata at 10:15 PM No comments: 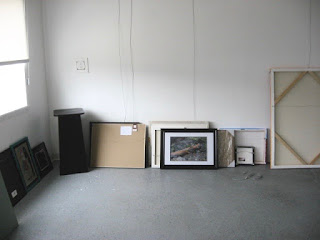 Not much going on around the Boatworks the past few weeks, but that's about to change.  Today was the intake day for the next show, which is called Themeless.  In recent years our first show of the year has traditionally been a Salon style show, which for us means open (not juried) to all paid up members and all exhibiting artists are invited to present their contribution to the assembled people at the opening.  Just a few minutes where the artists can talk about the piece and the process used to complete it, which can mean medium, tools, inspiration, etc.  They also may take a few questions.  This is our only show of the year in this format, but because it provides so much insight into the works, it is also always an interesting experience.

It is also the first show we've had since before Christmas, so that opening becomes an opportunity to reconnect with other members, friends, and local artists who come to see it.  Following Hurricane Sandy, BelmarArts was shut down for several months, but the first Salon show of the new year was packed with visitors, overjoyed to have the place back up and running.  Nothing so extreme this year, but word is that we had over 60 entries.  I don't know how many artists have more than one piece (we only get to talk about one artwork each), so I don't know how many artists may be presenting, but it should be a good evening.

They will start hanging the show on Wednesday, January 18th, and the reception will be Saturday, January 21, 2017, from 5 to 7 pm.  The Salon portion of the event begins at 5:30 sharp- we have a lot of people who will be talking about their work and need to start on time.  The show will remain on display during regular gallery hours through February 17, 2017.  Meanwhile, a bit of remodeling has been going on during the break, so if nothing else, you may want to check out the updated look of the Boatworks, but the art itself should be quite interesting.
Posted by arrabbiata at 5:59 PM No comments: