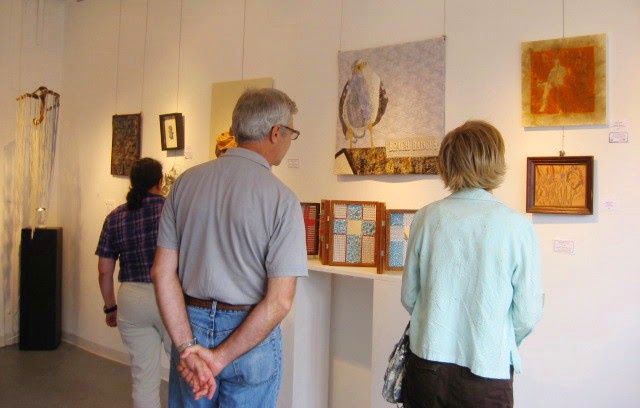 Tonight was the opening reception for the Fabric, Fibers & Paper Arts exhibition.  The front and back galleries are filled with a wide variety of art reflecting the possibilities of the show.  If it involves something that can be woven as the main material, it was the kind of thing we were looking for. 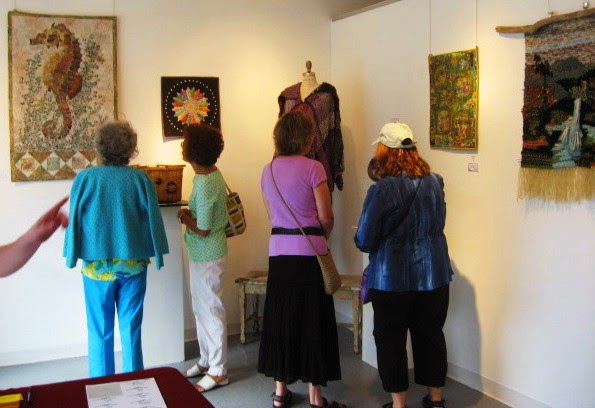 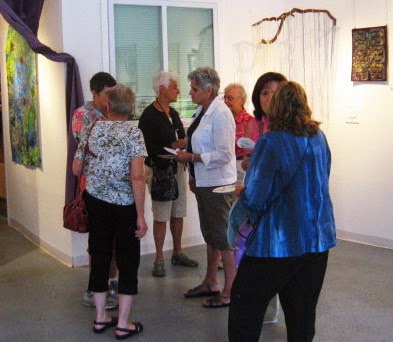 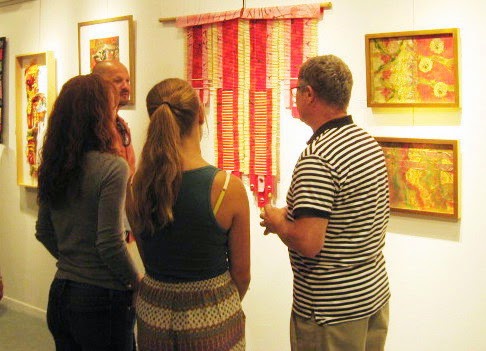 A good crowd showed up from the start, with at least 120 passing through over the course of the evening. 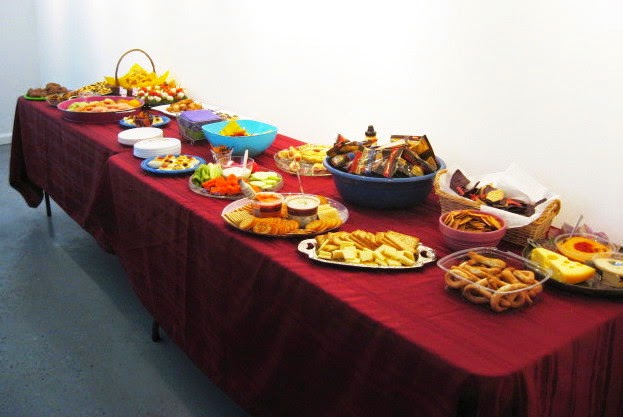 Participants in the show were asked to bring in food for the reception and as typically happens in such situations, they brought plenty.  The food table would eventually grow more full than seen above. 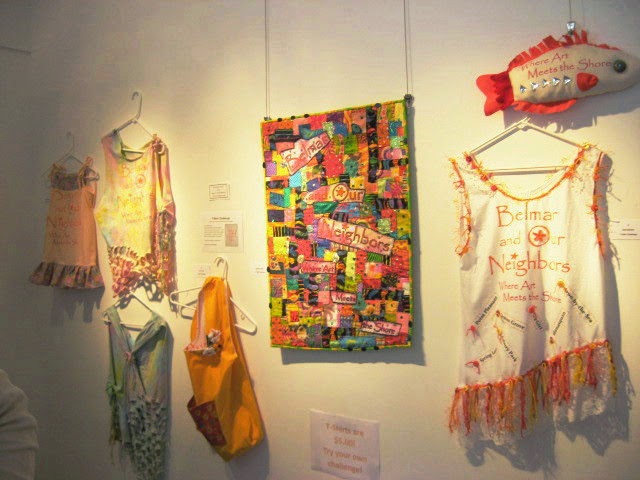 No prizes for this show yet, but we're working on it.  Visitors have the opportunity to vote for two awards.  Members of the Fibers Fridays shared interest group participated in a t-shirt challenge- a competition among themselves to convert an old Belmar Arts Council t-shirt into something new, and the entries are shown above.  Voting has been going on for several days, but more t-shirts are available for anyone who would like to join the contest.  Plus, there's a people's choice contest for the favorite piece overall in the whole show, with the votes open for the duration of the exhibition.

The Fabric, Fibers & Paper Arts show remains on display through September 26, 2014.  Regular gallery hours are Wednesday to Saturday, 1 to 5 pm, and there are extended summer hours through Labor Day weekend, 5 to 7 pm on Friday and Saturday, and 1 to 5 on Sundays.  Admission is free. Yesterday the Boatworks got a surprise visit from a bus full of fibers loving seniors from Jersey City.  They had come down for visit to Belmar, but decided that the day would be incomplete without visiting the Belmar Arts Council and the current Fiber, Fabric & Paper Arts show.  About 60 people poured out of that big white bus and came through the door, where they enjoyed this fun and colorful show.

We expect that we'll top that crowd this weekend at the exhibition's opening reception, Saturday August 23rd, from 5 to 7 pm.  And the show will continue to be on display during regular gallery hours through September 26, 2014.  Admission is free.

photo and information courtesy of Rebecca Szabo
Posted by arrabbiata at 2:34 PM No comments: 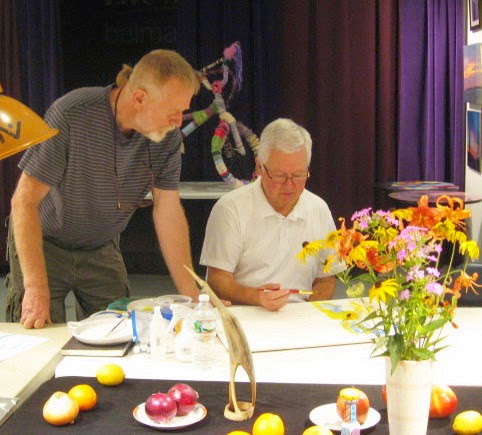 Just like the rest of Belmar, the Boatworks has been busy all summer.  One of the many classes offered this summer has been Water...Water..Watercolor with Sven.  Around here that name can only mean Sven Widen, who has been teaching drawing and painting classes here for years.  This new one specializes in watercolor, which has many specific qualities different from other types of painting. There was a three week session earlier this summer, and a new three week series began today. 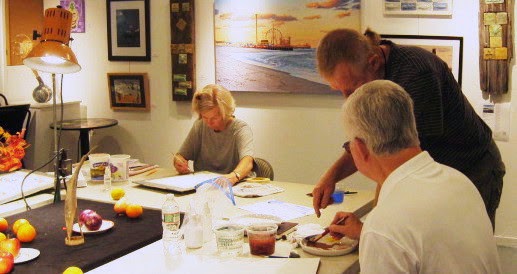 If there is a demand, the class may meet again in the fall.  If you are interested, check out the class page on our web site for more information or to contact the instructor.

Sip & See in the Summertime 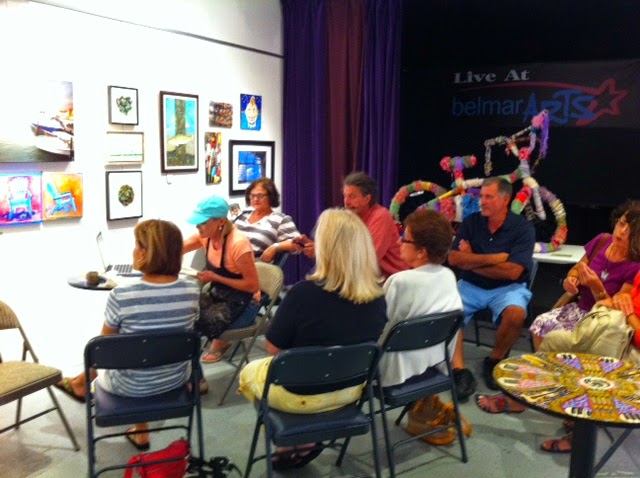 Next summer, renowned Atlanta based artist Suzanne Hughes Sullivan will be offering a workshop at the Boatworks called Still Life Oil Painting in the Classical Realist Tradition.  It will run two days, and cover such aspects of the process as choosing subjects and arranging the objects in the still life to create interesting compositions and patterns of light, then building the painting up from the traditional grisaille value underpainting to the oil glazes used by old masters for centuries.

But that's a year away.  Meanwhile the artist happened to be in Belmar this week and decided to offer us a little preview.  Last night a group joined her at the Boatworks to enjoy beverages and see a little demonstration of the process.  If this sounds like the kind of workshop that would interest you, be sure to check out our class listings next summer.

Posted by arrabbiata at 9:29 PM No comments: 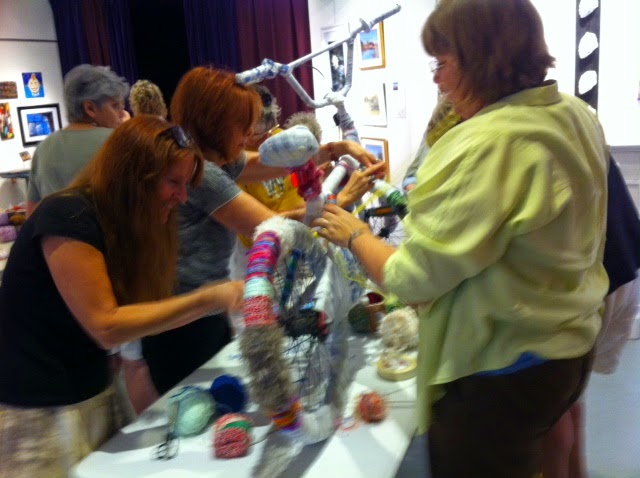 Some may have been concerned when the Fiber Fridays group announced that this month's meeting would include a Yarn Bombing event.  However, a little research showed that this artistic process merely involves wrapping things completely in yarn, and no explosives are involved.  It has its roots in conceptual/street art, but here in Belmar it was being practiced indoors today.  The focus was on a bicycle.  This is not the first time that the BAC has been involved in bicycle art, but this was certainly the fuzziest.  Above and below are photos from early in the process, with some of the bike still visible. 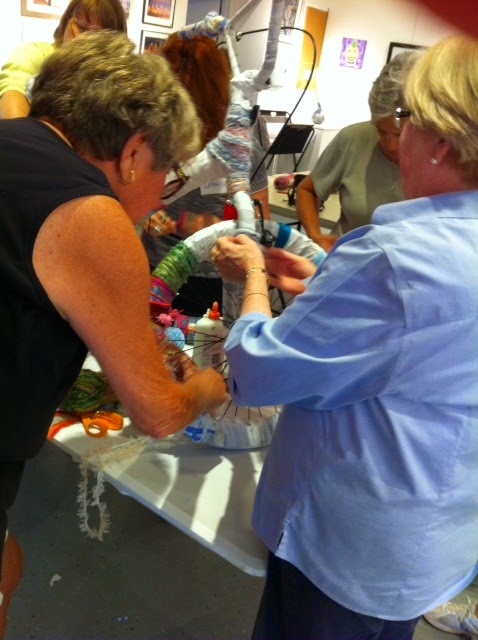 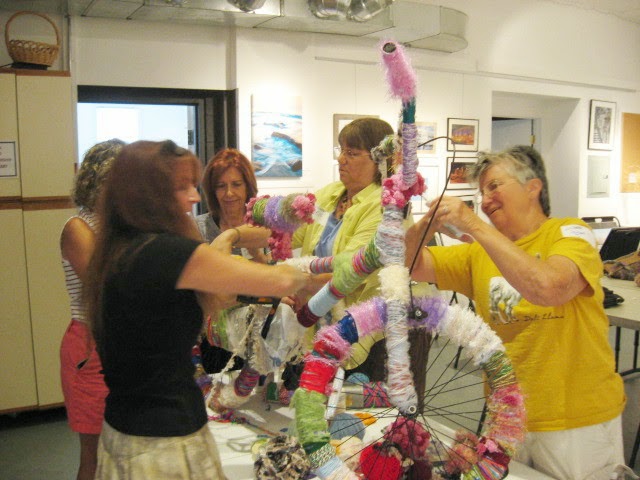 Over the course of the day, eleven people were involved in the event, resulting in some colorful chaos. 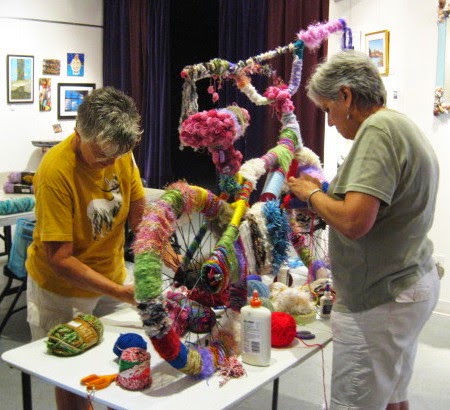 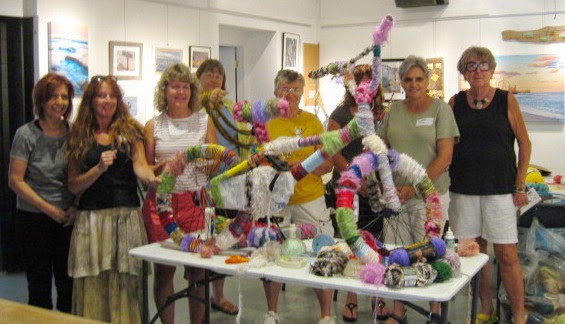 Above, a group of yarn artists takes a break near the end to pose by their creation.  Below, the finished bicycle, complete with yarn streamers on the handlebars. 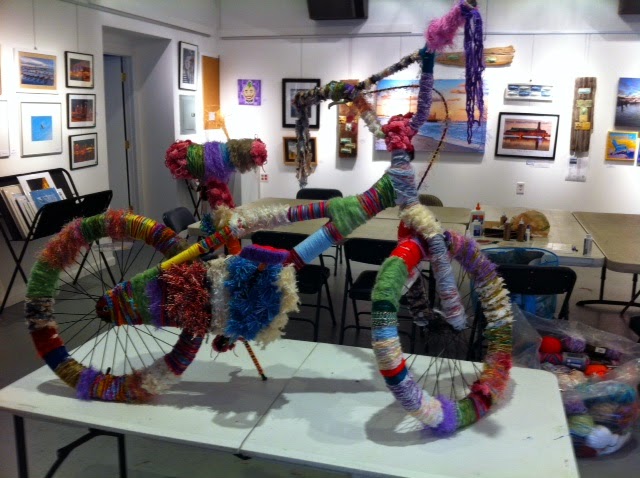 This was more than just colorful fun.  Part of this is to promote the next Boatworks exhibition- Fiber, Fabric, and Paper Arts.  The show will feature such processes as basketry, bead work, clothing design, crochet, dying, felting, knitting, weaving, needle work, and paper art.  And at least one bicycle.  The opening reception will be Saturday, August 23, 2014, from 5 to 7 pm.  Admission is free and all are welcome.

Posted by arrabbiata at 11:13 PM No comments: 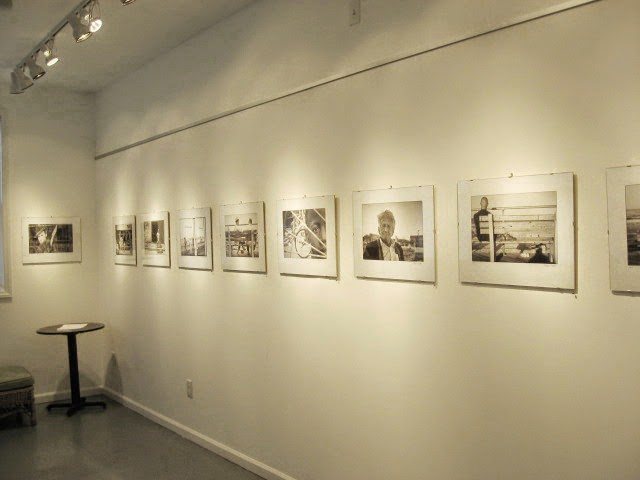 Tonight the Boatworks hosted a reception for a photography exhibition in our side gallery.  The show features black and white photographs from Michael S. Miller's series Everyday People.  The full series includes 40 photographs of everyday people on the street, taken in locations around the world over the past 20 years.  This exhibition in Belmar includes 10 selections from that set, all of which were taken in Monmouth county shore towns, fitting well with the Jersey Shore Moments show currently in the front and back galleries. 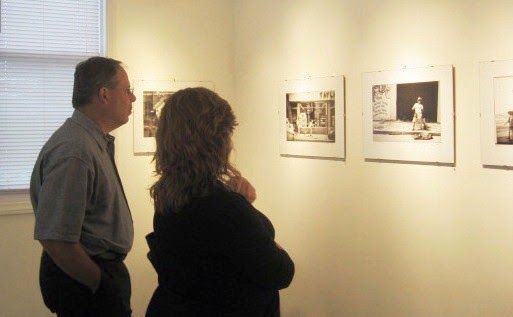 We saw a steady flow of visitors over the course of the two hour reception. 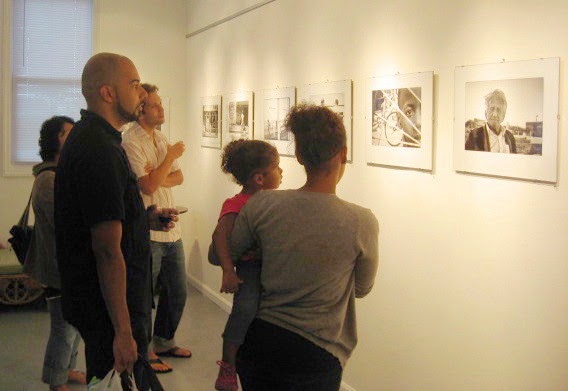 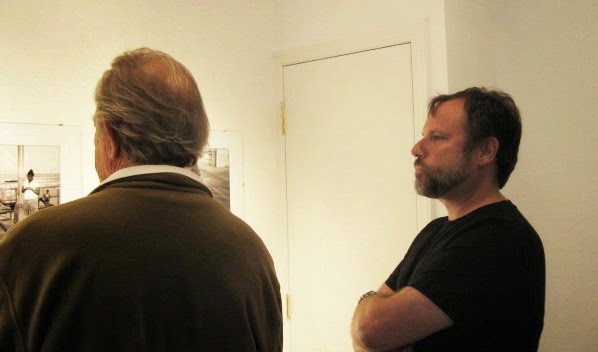 The artist was present the whole time, answering technical questions about the photographs in the show, and sharing stories about the experiences that went along with collecting the images. 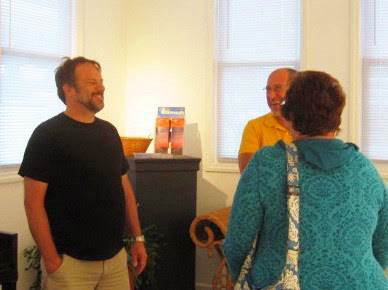 The Everyday People exhibition will be on display during regular gallery hours through August 16th.  Admission is free.

Posted by arrabbiata at 10:16 PM No comments: