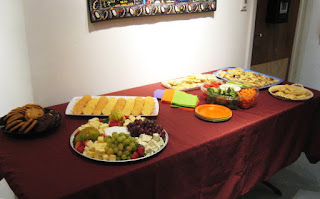 Every year for the past 8 years, the BAC has held an annual juried show in the spring.  And for the past 6 years, the tradition has been that the award winners from that show get an exhibition of their own the following year.  So the process of putting together the current exhibition at the Boatworks goes back to last April, and the 8th Annual Juried Art Show, but things didn't pick up until the beginning of January and the reopening of the Boatworks.  The artists met a number of times over the past month, to work out such details as the layout of the show, their contributions to the opening reception, production of the postcard announcements, and the installation of the show.  But each deadline was met.  All the work was in place a few days ago, the threats of snow never materialized, and the artists all showed up with arms full of food and drink.  And before too long, the viewers showed up, too. 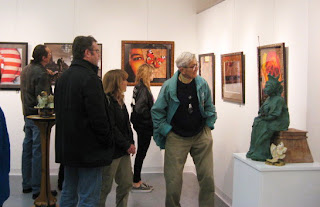 Three of the artists shared the front room of the Boatworks.  A crowd above checks out some digital abstracts from Rick Alvarado, as well as the clay sculptures of Carol Gleason.  Below, a few more sculptures and some of Guido Guazzoni's landscape paintings. 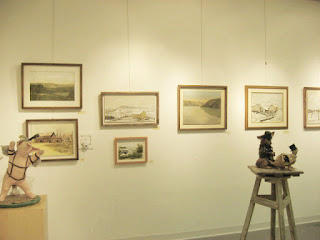 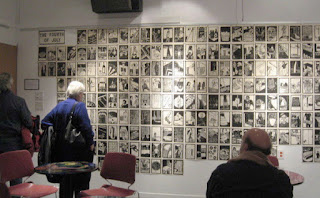 The back room featured art from two artists, both using grids as part of their design.  Seen above is part of Paul Bonelli's 366 woodcut print Fourth of July series, which occupied the whole back wall.  Beverly Hertler filled the remaining walls with her colorful quilt pieces, combining traditional fibers and other materials. 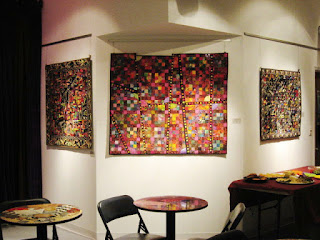 Several dozen visitors came through, all very impressed with the artwork both individually and collectively, leaving a tough act to follow for next year's group of winners.  This year's Judge's Choice exhibition remains on display during regular gallery hours through March 8, 2013.

March 8th is also the first day of intake for the 9th Annual Juried Art Show, so start thinking now about what art you'd like to submit.
Posted by arrabbiata at 11:02 PM No comments:

This Weekend at the Boatworks 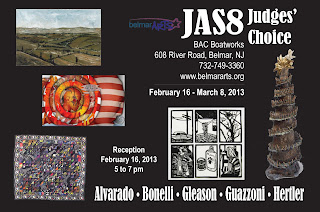 Over the past several days the five winners of last year's annual juried show have been filling the Boatworks with examples of their art.  There are digital abstracts from Rick Alvarado, woodcut prints from Paul Bonelli, hand made clay sculptures from Carol Gleason, oil paintings from Guido Guazzoni, and fiber arts from Beverly Hertler.   It all officially debuts this coming Saturday evening at the opening reception.  The reception is from 5 to 7 pm on February 16th and the show remains on display during regular gallery hours (Wed to Sat 1 to 5 pm) through March 8, 2013. Admission is free.

After the receptions ends we'll be getting the building ready for our latest musical performance.  The BAC will be hosting the Rodeo Junkies, featuring Jo Wymer, Vic Della Pello, and Helen Radtke.  The show begins at 8 pm, with tickets available for $10 at the door.

Posted by arrabbiata at 1:50 AM No comments:

Art Walk on A Street 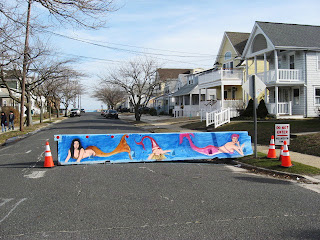 Despite whatever the groundhog tells us, we still have at least a little bit of winter left.  We spent a good bit of today in the 20's, and we ended the day with snow.  Despite the cold and wind that seem like they've been around for weeks, a lot of people have been on A Street, checking out the concrete barrier murals.  Some driving by, and some braving the cold to tour them on foot.  And the volunteers have been busy on the few warmer days that we've had, because some new ones have been started, and some earlier ones have been added to.  Our blog page about this project has been updated to include the  latest versions of this concrete barrier art, so if a visit to this gallery along A isn't practical, check the work out on our blog.
Posted by arrabbiata at 12:54 AM No comments: