We have two big Halloween related activities scheduled in October at the Belmar Arts Council.

Pumpkin Carving Contest- At the Boatworks on Saturday, October 18, from 4 to 8 pm. Carving will take place from 4 to 7 pm, with judging and prizes awarded from 7 to 8 pm. Those who register in advance will receive a pumpkin to work with. 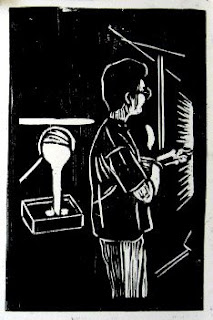 Our usual monthly members meeting will take place at a special time and place in October- Thursday, Oct 2, at 7:00 pm, at Hot Sand in Asbury Park. Hot Sand is a glass blowing studio open to the public, where visitors can get hands on experience blowing and shaping molten glass. We will have our regularly scheduled monthly meeting, then be treated to a demonstration of the process. Hot Sand is located in the 5th Avenue Pavilion on the Asbury Park boardwalk (near 4th Ave). Directions and other information are available at the link above.

Posted by arrabbiata at 9:52 PM No comments: 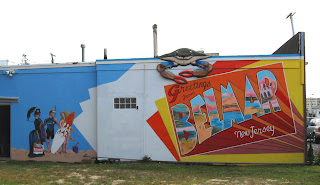 Today was the official dedication of our new mural on the north side of the Boatworks. The top photo shows the completed work. Our crab had a playmate, the big red one on top of the Jake's Cakes trailer, here for the occasion with a round or two of free crab cake sandwiches for everyone. 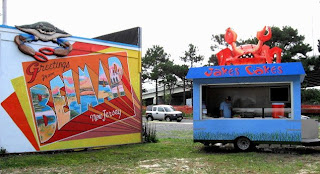 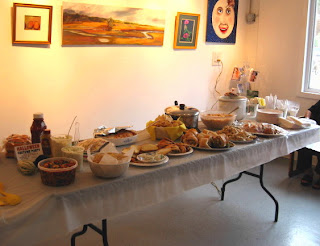 However, this was a pot luck picnic, so most of the food was inside. We had two full tables of food contributed by people in attendance, hot and cold foods of all kinds, not to mention desserts. 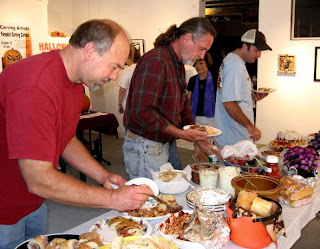 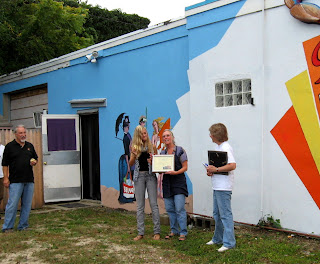 We took a break from the feasting to gather outside where Pat recognized Calli Dobrzynski, one of our teen artists, for her contributions to the new mural. 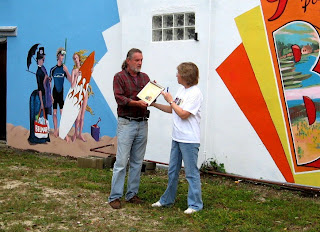 Also Bob Mataranglo, who once again used his contacts to get us the paint, as well as making a really cool 3D piece- the big blue claw crab.

Merry Brennan represented both the BAC and the town of Belmar in leading us all in a crab cake sandwich toast to the new mural- better than champagne anytime. 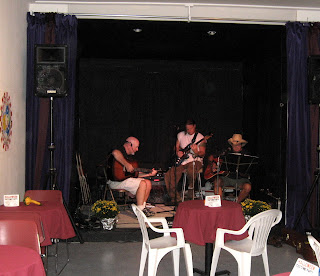 Not just eating at this picnic. We had some live entertainment from some familiar faces (above) and Sandy Taylor organized a great art activity- fish printing. That's right, making prints from fish, which went onto shirts, bandanas, etc. Fun for all ages. 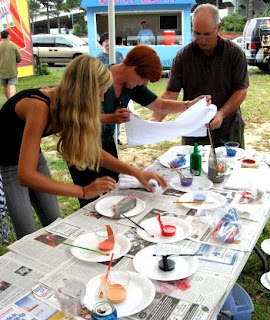 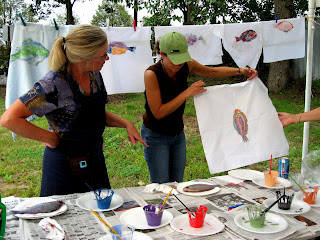 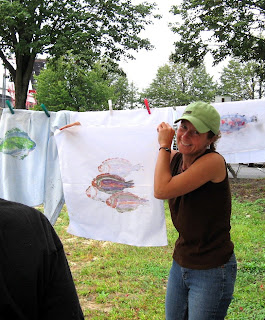 Special thanks to Chris Brandl of Jakes Crab Shack in Belmar, Siperstein's Paints for once again providing us with paint for the mural (and the fish prints), all those who worked on the mural, and to everyone who brought dishes to the pot luck.

Posted by arrabbiata at 10:13 PM No comments: 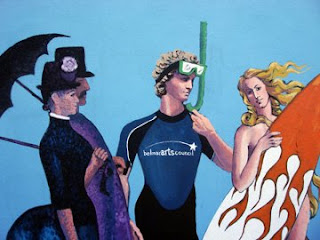 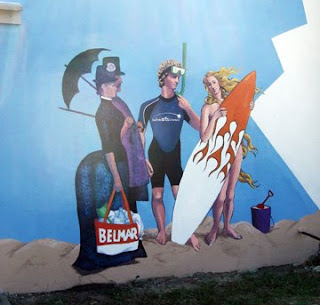 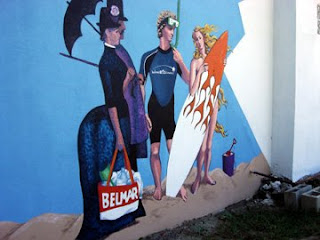 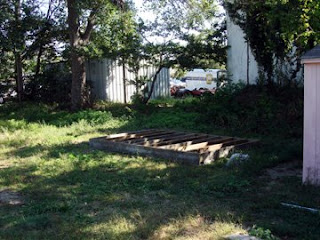 All around the Boatworks, people are getting ready for the upcoming mural dedication festivities this weekend. The mural itself is getting a little closer to completion, as seen in the above photos from Pat. Meanwhile, Hutch worked on a support for the outdoor stage (bottom photo) that will be part of the event, which will be Sunday, September 28th, beginning at 3 pm.


Posted by arrabbiata at 9:06 PM No comments: 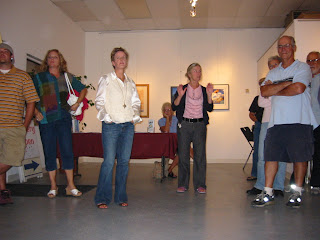 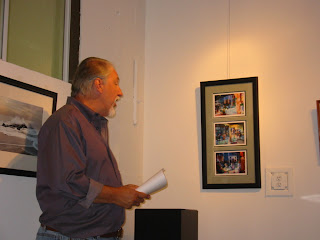 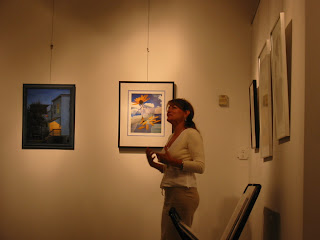 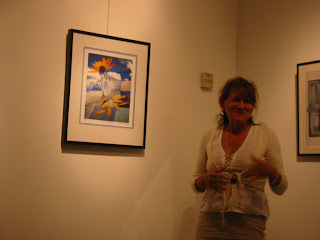 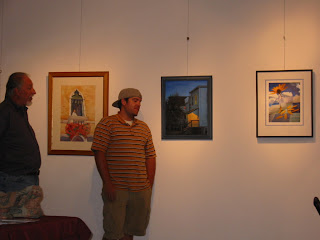 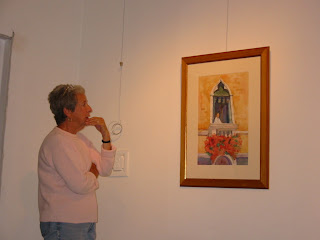 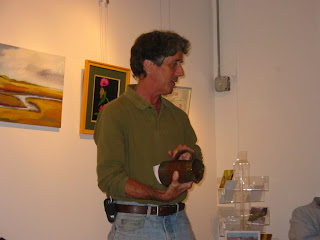 Last night the Boatworks hosted the most recent Member Salon. All members were invited to put a piece in the show. The well attended event was a platform for each exhibiting artist to discuss their work with peer members.
Discussions ranged from methods and media to the artists' visions and ideology.
Artwork mediums included oil, watercolor, acrylic, pastels, woodcut, photography, collage, and pottery, a cross section of art which will make for a great gallery visit.
Most of the artwork is available for sale. The gallery will be open beginning Wednesday September 17. Regular gallery hours are Wednesday to Sunday, 1 to 5 pm. For more information, call during gallery hours 732 749-3360.
The exhibition will remain on display during regular gallery hours through the end of October.
Photos courtesy of Wendy Green
Posted by arrabbiata at 12:15 AM No comments: 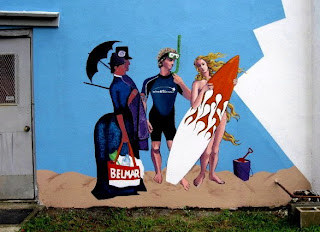 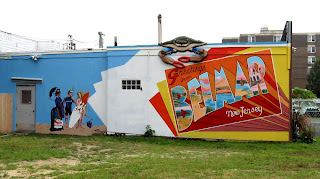 The north side mural is almost done. The scaffold is gone, the figures are almost done, and they have some sand to stand on. A little bit of detail and touch up remains, but that should all be taken care of before its official dedication on September 28. For more information about the dedication event, click here.

Posted by arrabbiata at 4:40 PM No comments: 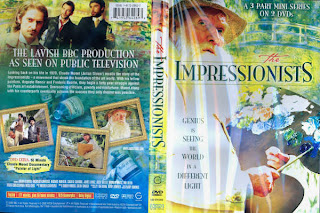 The BAC will be presenting the BBC drama The Impressionists, as a two part series hosted by Sandy Cook. The lavish production shows how the impressionists stuggled to break into the closed art hierarchy of the French art establishment of the 19th century. It's told through the eyes of Monet, who tells stories about himself, Renoir, Bazille, Cezanne, Manet, Degas, and others, based on actual letters and other documents of the time.

The film will be shown in two 90 minute parts, with discussion to follow each night.

Both nights begin at 7:30 pm at the Boatworks. Admission is free.

Posted by arrabbiata at 4:28 PM No comments: