How To Paint a Train Station in a Snowstorm

Back this past summer the Belmar Arts Council announced a competition to design and produce a mural to cover the 80' wall of the Belmar Train Station facing the tracks.  There were about a dozen entries and a town organized committee selected a winner, Delia King, an experienced muralist from Philadelphia.  Her design (above, click to enlarge) is a Belmar-centric view of the region, with the beach in the foreground on the right, and a view that stretches back to New York harbor on the far left.

Painting a mural on the train station includes a number of challenges.  Besides the 80 foot length, the wall is interrupted by several doors and windows.  The wall is on what can be a very busy train station platform, which could lead to painters and passengers getting in each other's way.  The exterior of the train station was old and not suitable for painting a mural that will be expected to last for years.  And by the time the decision was made the days were growing shorter and colder, and the experienced muralists within the BAC know that paint doesn't dry well in cold weather.  However, our muralist had an answer to these problems. 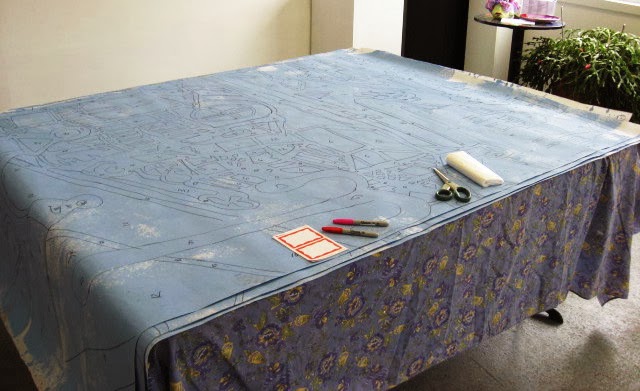 Delia's process is to paint the mural on another surface and adhere it to the wall.  A few months ago we primed some plywood panels, which have since been attached over the old wood sheathing on the station.  The mural is painted on pieces of synthetic polytab cloth, informally known as "parachute cloth".  Lightweight, flexible, and very resistant to tearing.  Constructing this mural will require 25 cloth panels of different sizes and shapes, several of which are 5' x 8' like the one shown above.  These cloth panels are primed and the mural design is reproduced on them as a line drawing.  The painting is done with a special mural grade acrylic paint.  She had premixed about a dozen colors (below) which would be used throughout the whole mural. 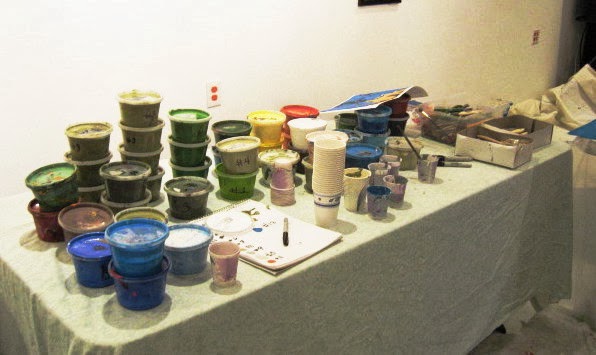 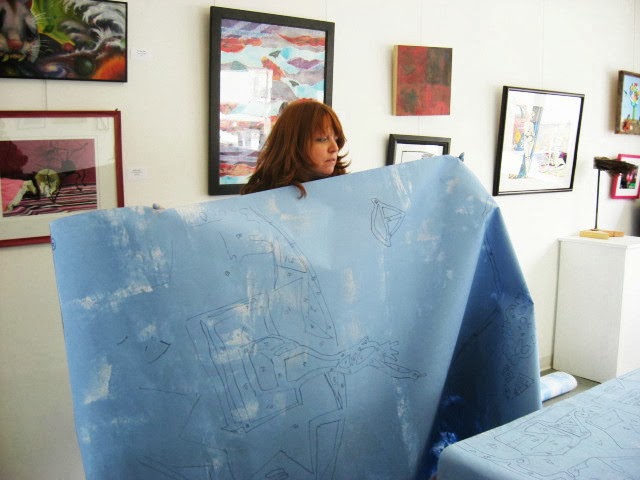 Early this morning the Boatworks was set up with big tables in both the front and back rooms, and these prepared cloth panels placed on top.  Above, Delia holds up a panel that will include the Statue of Liberty. 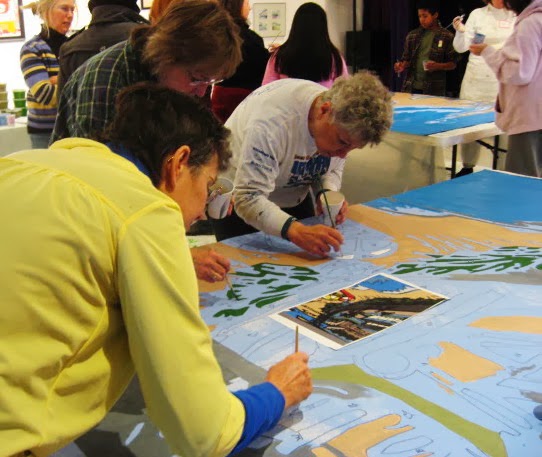 The next step was to get some volunteer artists.  Word had been put out in our newsletter, on our website, through newspapers, social media, other arts organizations, etc.  It all proved incredibly effective.  We are estimating that we had more than 80 people show up over the 6 hour event to lend a hand with the project.  Represented in our volunteer painters were Girl Scout troop 1564 of Howell, art students from St Rose in Belmar, experienced veteran painters of many public art projects in Belmar, curious and interested members of the community, and many of our active members. 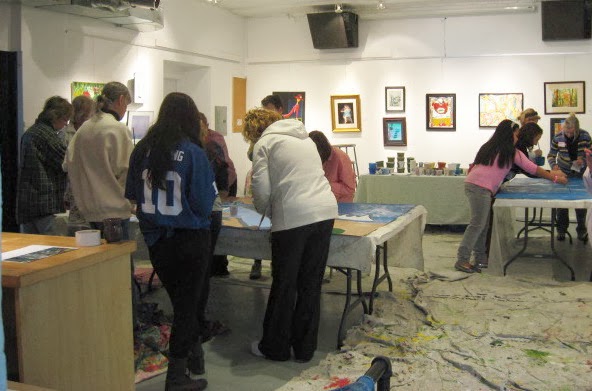 The drawn designs on each panel were coded like a giant paint by number project, so the volunteers could pick up brush and cup of paint, and jump right in. 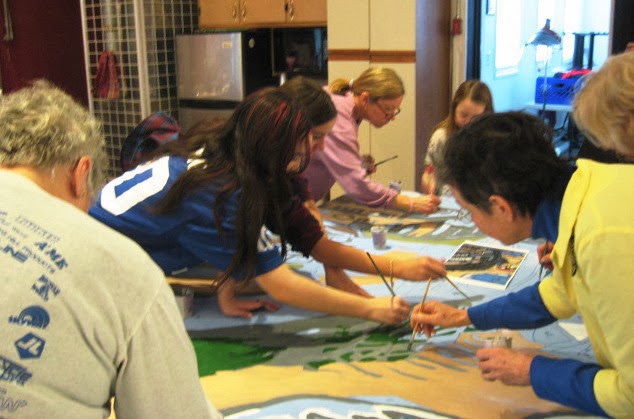 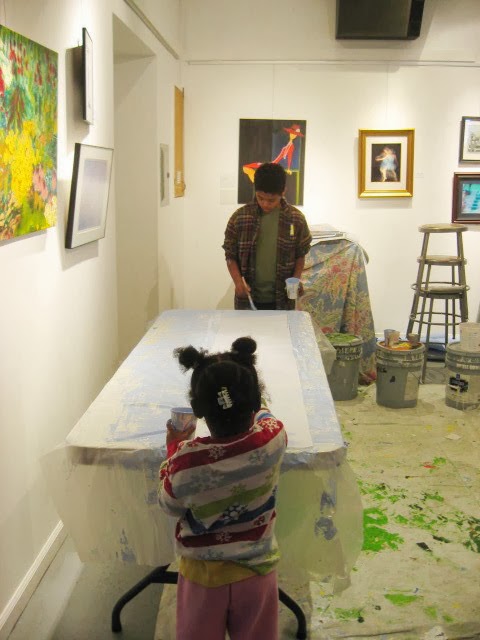 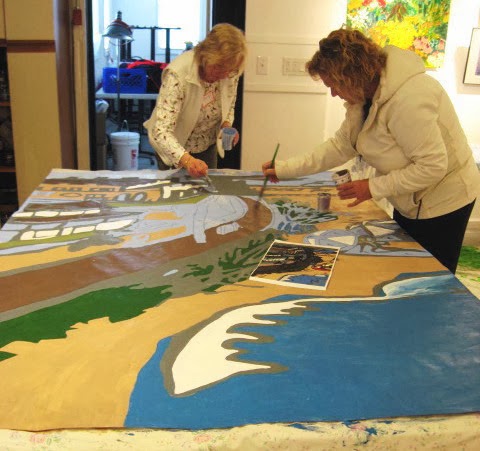 As colors filled each panel, the big shapes and scenes of the composition came together.  In the later part of the day, we were visited by a video crew, shooting the artists at work and conducting some interviews.  The resulting video will be used to promote this as part of the Monmouth County Arts Corridor project, using the very active art scene in many towns along the shore to expand more arts through the region, and will eventually be posted online. 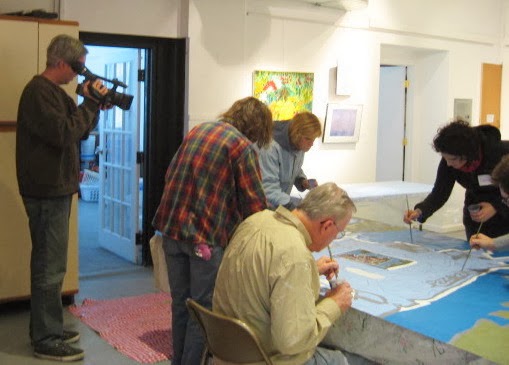 Below, the panel shown previously with a line sketch view of New York harbor now has some base colors. 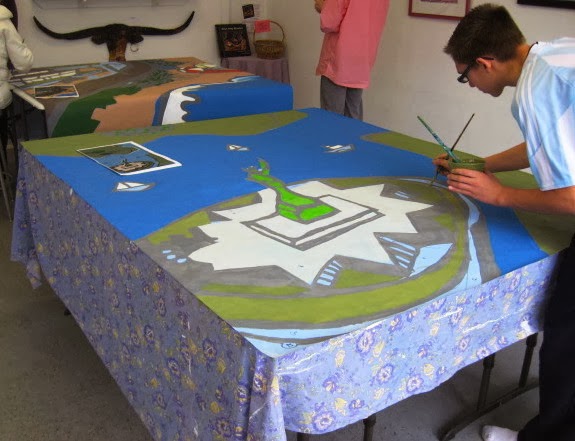 We started to wrap things up around 4:00 pm.  The snow that had been swirling around for the past few hours was getting heavier and starting to stick, plus we had to clear the space out for a scheduled musical performance in the evening.  Delia will continue work back at her studio, with a plan to start installing it in March or early April, when the weather cooperates.  An official dedication at the site is scheduled for late April.  Check back here and the main website for more details.

Posted by arrabbiata at 7:59 PM No comments:

This week has been snowy, icy and unusually frigid, but it was a hot time at BelmarArts this past Sunday, January 19, with Bloody Mary Sunday.  The event was held to raise funds to improve the air conditioning at the home of BelmarArts, the Boatworks.  Cars filled the parking lot as members and guests streamed in during the afternoon to visit, eat, listen to the music of Davey and Chard -- and try a Bloody Mary if so desired.  Door prizes were handed out through out the 4-hour period to keep anticipation high.  The result -- $2,300 was added to the air conditioning fund. 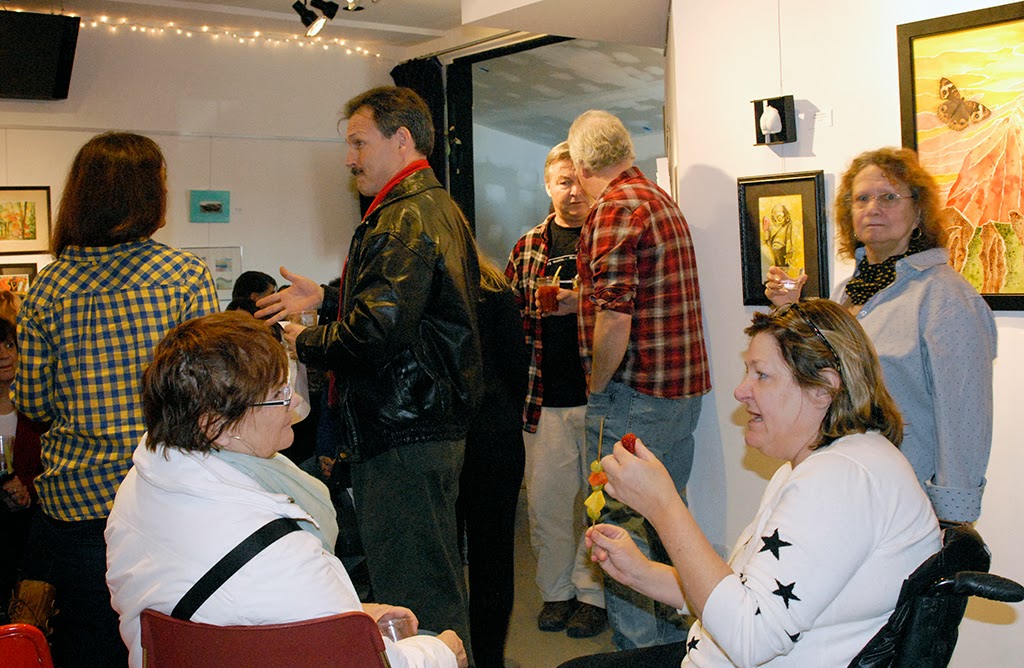 While the party went on in the Big Room guests enjoyed Whimsy - Members Art Show and Salon in the front Gallery.  The show continues through February 1 if you haven't seen it yet. 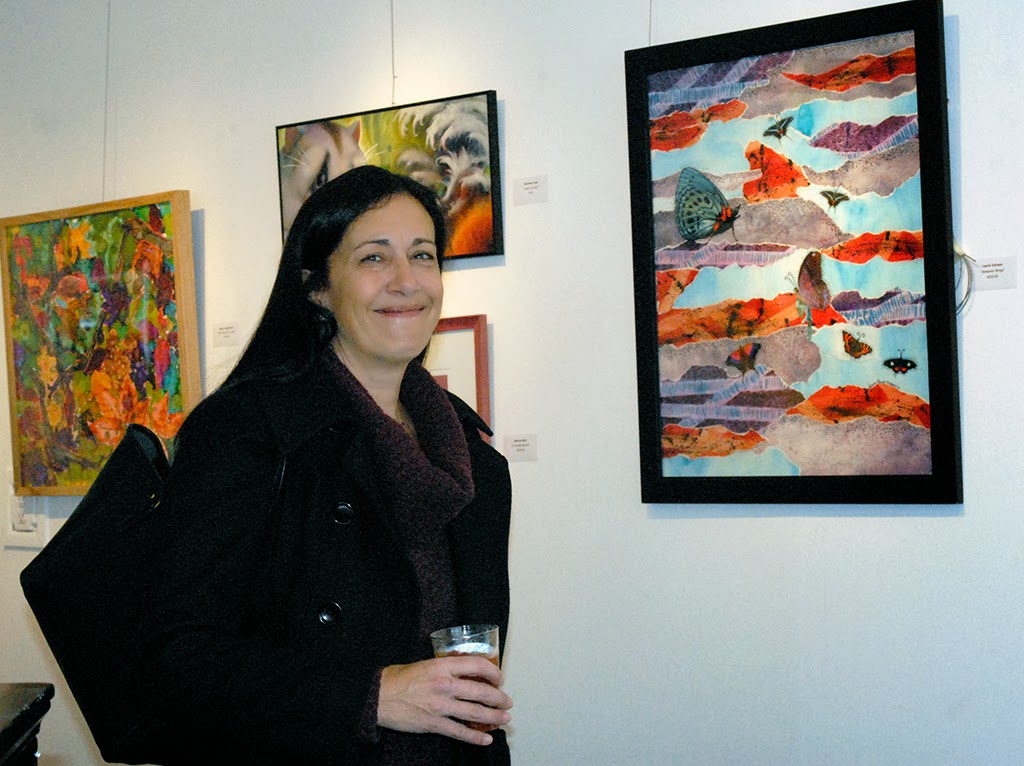 Many volunteers and local merchants made the day a success.  A special thanks to those who worked and to D'Jais, Belmar Cafe, Ragin' Cajun, Glenside Trading, Stay Gold, Gerrie's Sweet Bouquet, and the BelmarArts Trustees for their contributions of food and door prizes. The event was chaired by BelmarArts co-chairmen Ali Martin and John Hutchinson and BelmarArts Trustee Joe Villa.

Posted by Unknown at 1:56 PM No comments: 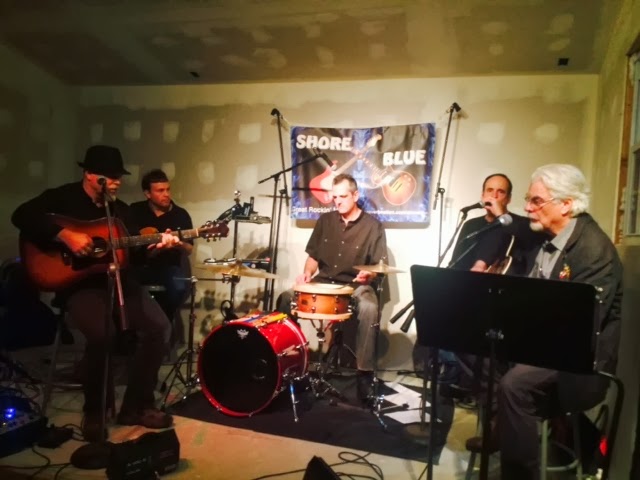 Saturday night (January 18) Live@Belmar presented Tom Brennan and Shore Blue.  The band played a 2-hour set of blues music without a break to an energetic crowd.  Tom, a local Belmar resident, was joined by Charlie Wuth on guitar, Gary Neuwirth on harmonica, Paul L. Ulinski on baass and Chris Martell on drums.

Note the unfinished stage.  We are still working on it.

Next from Live@Belmar will be Harper's Fellow with special guests Thomas Wesley Stern on Saturday, January 25 at 8pm.  Check the BelamrArts website (www.belmararts.org) for more details.

Photo by Chris Krebs
Posted by Unknown at 2:59 PM No comments:

Double Header at the Boatworks


Tonight the Belmar Arts Council kicked off the new year with a pair of events that showed the variety of arts that are part of our mission.  The weather wasn't great, but it wasn't frozen either, so the crowds came out on a wet Saturday night to see some of what we have to offer.

The evening began with what has become our annual tradition this time of year, a member salon.  All members are invited to include a work in the show, and then to present their piece to the assembled crowd at the reception.  This year the theme was Whimsy, and all the paintings, drawings, photographs, sculptures, and mixed media pieces indeed included whimsical subjects and styles.  Most of the 35 artists with work in the front gallery were present to discuss and answer questions about their art.  There are also another 21 pieces in the back from those same artists for everyone to enjoy.

The Whimsy show will remain on display through February 1, 2014 during regular gallery hours.  Admission is free. 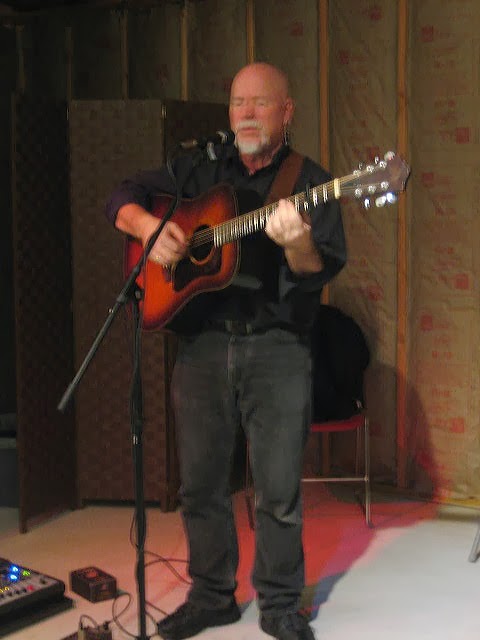 At 7:00 pm the Salon was finished, but we weren't done yet.  Tom Brennan provided some musical entertainment while we set up more tables and chairs and restocked the refreshments tables.  By 7:15 we were ready for the next event, a book launch party. 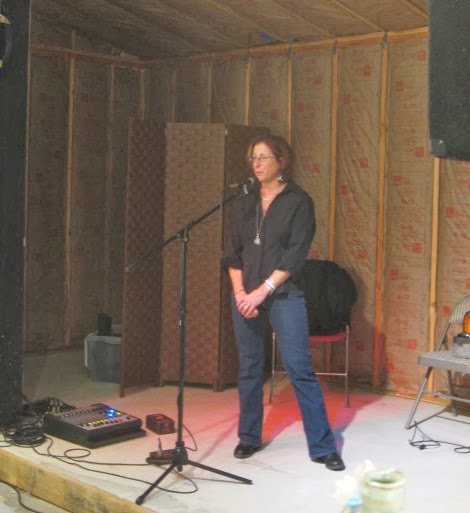 Merry Brennan took the stage briefly to start the event.  Last fall Merry decided to offer a weekly class on the topic of self publishing, which she had recently had success with.  We've had other writer groups meeting at the Boatworks in recent years, so it was no surprise that her classes quickly filled up.  Even better, two of those students have already taken the process as far as publishing books.  We had a standing room only crowd in the back, many of whom were first time visitors. 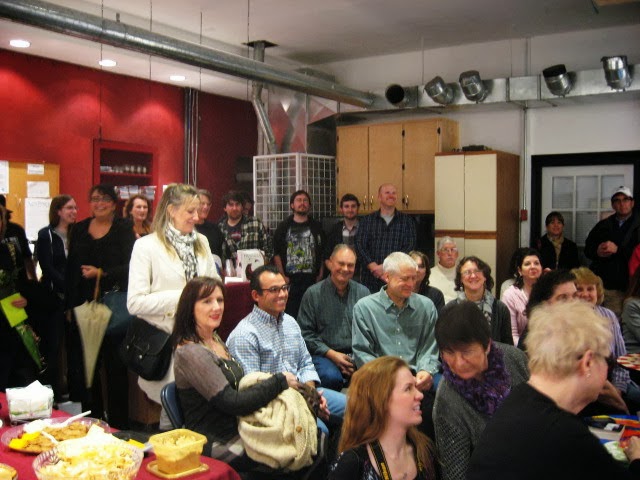 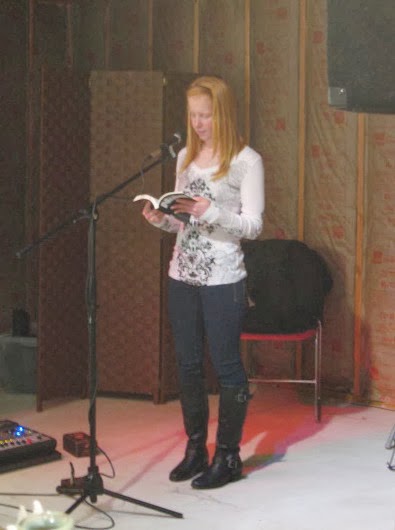 After Merry's introductory remarks, our two new authors each took a turn at the microphone to read passages from their new books.  Above, Lauren Kehoe read from her novel The Numb.  Below, Pat Heaney gave a reading from her novel Mean Sea Level. 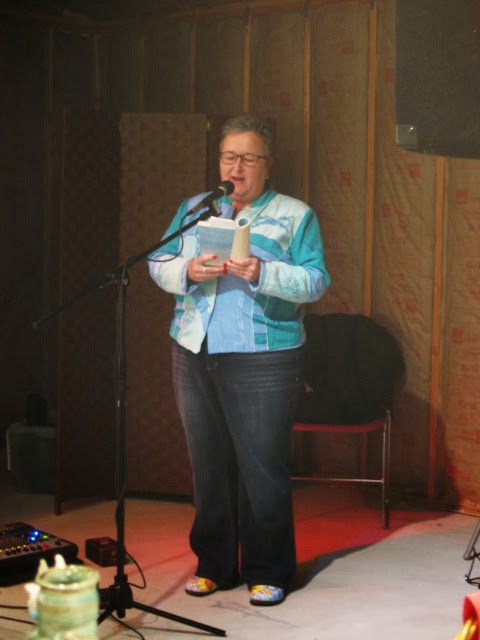 After the readings, each author took a seat and autographed copies of their books for their fans in attendance.  Don't worry if you missed tonight's event- both books are available for sale through Amazon. 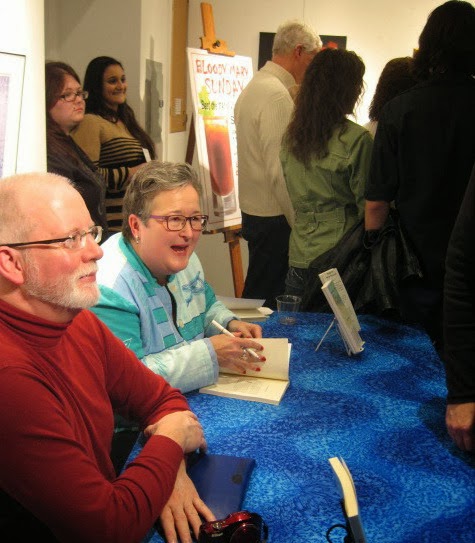 And if tonight's book launch party has you wondering how you can become an author yourself, Merry Brennan's Self Publishing series is starting up again this week.  The six week course covers everything from perfecting the manuscript to marketing the published book.  The class meets on Tuesday nights from 7:00 to 9:00 pm starting January 14th.  People may sign up for any individual session(s) or save a little money by taking all six classes.  More information is available on our main website.

So tonight we had visual art, music, and literature.  Looks like it could be the start of a good year for arts in Belmar.
Posted by arrabbiata at 10:57 PM No comments:

On Saturday (January 4), after Friday's snowstorm, artists arrived at the Boatworks. 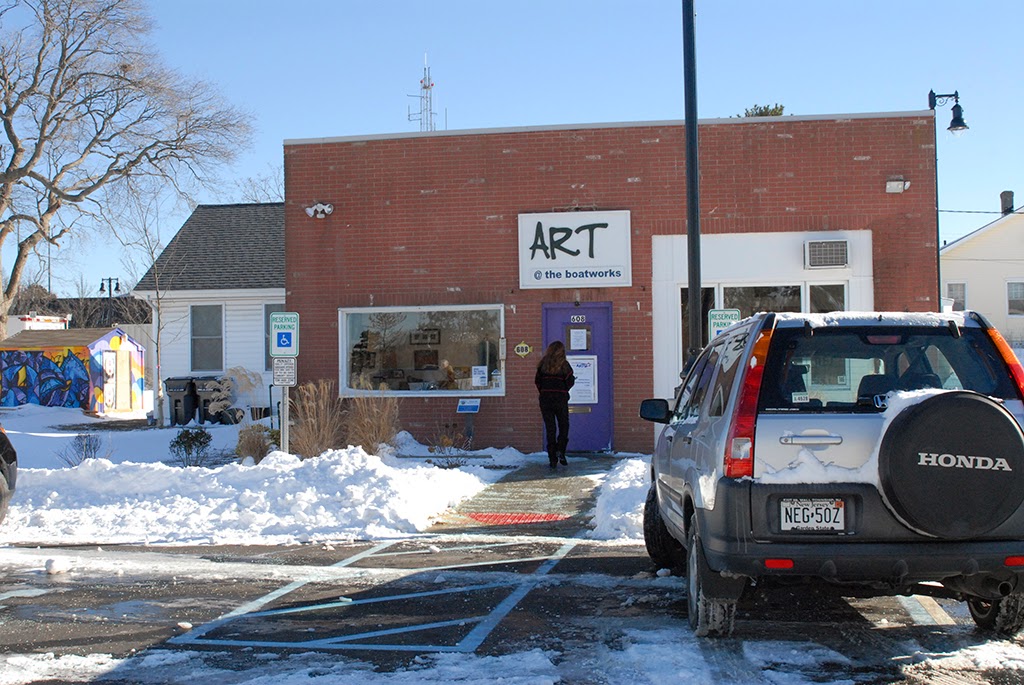 The WUF Show and Sale set-ups were packed up for the next time. 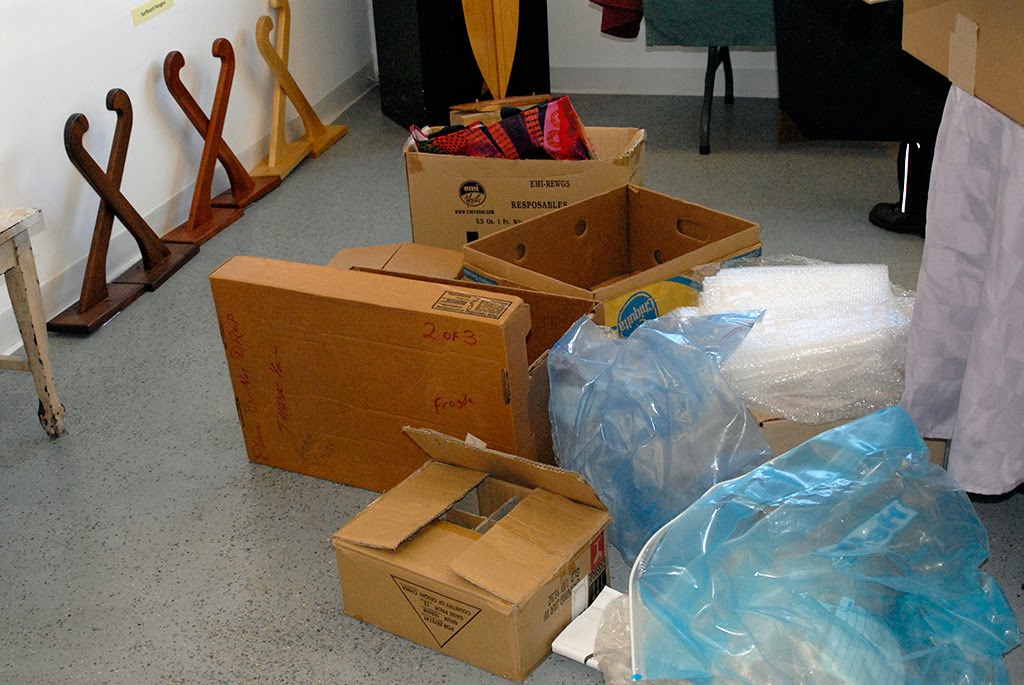 And even while the boxes were filled, Office Administrator Rebecca Szabo continued to make sales. 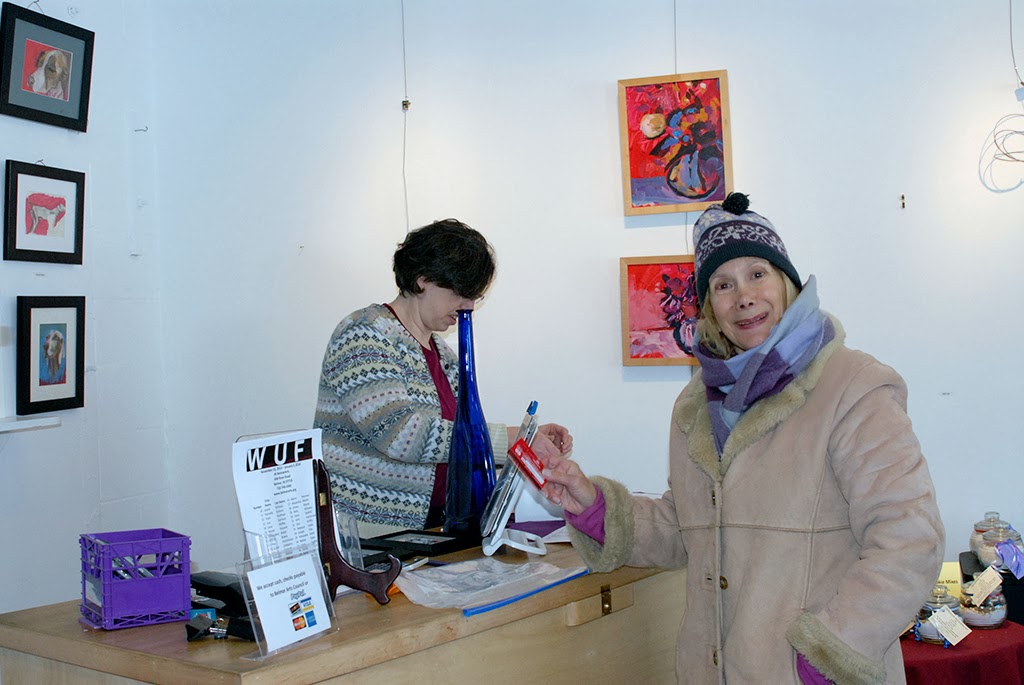 Artists picked up artwork from the WUF and Art in the Big Room shows and dropped off pieces for the next show, Whimsy - Members Salon and Show.


The Whimsy show opens on Saturday, January 11 at 5:00 p.m. with the members'salon, during which all  the entered artists discuss the work, begins at 5:30 p.m.