Today was Belmar's annual Art Walk event.  Local artists were set up in and around businesses up and down Main Street, and that included a bunch of people from the BAC.  Our members were displaying visual art, music, and the written word.  For the occasion we had the Boatworks open all day, and we had visitors throughout the day, including quite a few first time visitors.  The beautiful spring weather didn't hurt.  The official end of the day was live music at the Boatworks from our Jam Band.
Posted by arrabbiata at 11:35 PM No comments:

A New Place to Paint 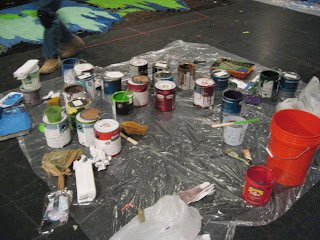 When you combine a huge gathering of paint cans and the Belmar Arts Council, usually that means there's a mural in progress.  Not quite the case here.  Yes, some of us have been involved in a big painting project, but in this case it's the sets for a play.  Pat Hutchinson, who has been a big part of our mural projects, agreed to be part of the effort to decorate the sets for the upcoming production of Spamalot at the Algonquin Arts Theater in Manasquan.  For the past three weeks, she and some other volunteer BAC artists (including Bonnie Smith, Ralph McGeehan, Paul Bonelli, and Jim Aberle) have been lending their painting talents to create the backgrounds and scenery for much of the play. 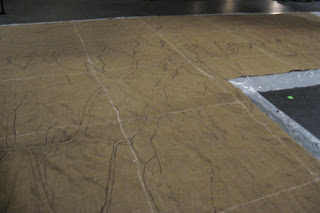 One if the first things we worked on was a scary and expensive looking forest, painted on large pieces of burlap.  A basic line drawing was created, and a grid was used to transfer it to two very large L shaped pieces, one for each side of the stage.  A sketch done with markers for the left side forest can be seen above.  Below, our painters have started to block in some simple colors.

In subsequent days, colors were added in the background, and layered color was used to indicate patterns of leaves and other natural features.  Similar methods were later used to create a large piece that will hang between the two side L's 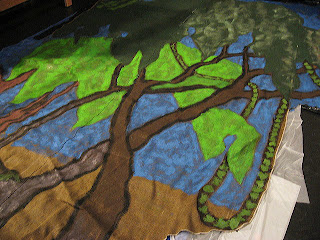 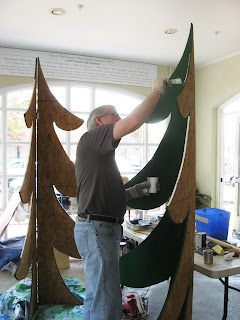 Those weren't the only trees painted.  Above, Ralph paints two stylized freestanding wood trees, first with green paint last week, then today adding snow to the tops of the branches.  Below, Pat works on a bit of scenery that will show the effects of a particularly nasty creature encountered by the play's hero.  Our people were responsible for painting many other smaller freestanding pieces that will be on stage. 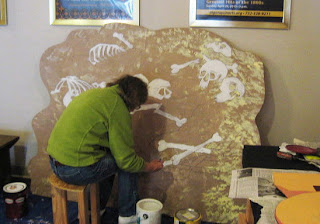 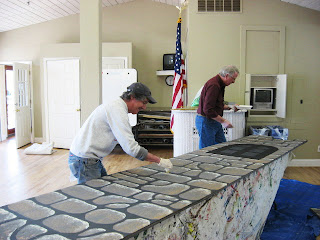 Another really big project was producing stone wall backdrops.  Lucky for us, the stone was painted on cardboard backed with wood frames, because some of these sections are 20 feet tall.  Once dried, these were carried to the stage and permanently attached to the main set.  Above, Ralph and Jim are shown adding highlights to the "tops" of the stones.  Below, more stone drawn and painted by Pat and Paul, on what had been raw wood just hours earlier, surrounded by the chaos of other construction, lighting tests, and a fog machine. 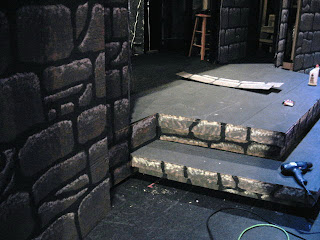 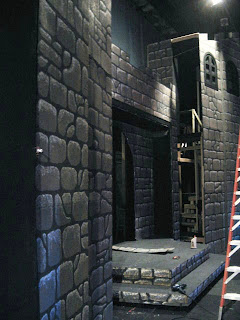 A wider shot, showing more of this large construction, which includes hidden stairways, and panels that unfold to change the settings.  There are a lot more things that were painted over the past 3 weeks, both from the BAC artists and from other volunteers, but we want to save a few surprises for those going to see the show, which opens this coming Friday.
Posted by arrabbiata at 10:23 PM No comments: 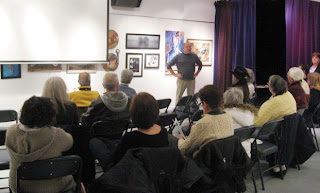 This evening the Boatworks hosted the BAC's monthly member meeting.  After the usual business, we had a special presentation about the artist John F. Peto.  The artist lived and studied painting in Philadelphia in the late 19th century, becoming a master of the trompe l'oeil style of still life painting,  and a part of the established Philadelphia artist community.  After a few years of enjoying vacations in Island Heights, he decided to permanently relocate there, building a house/studio for himself and his family.  He remained there until his death in 1907.  That house, which had remained in his family for over a century, has recently been restored and opened as a museum devoted to the life and work of Peto.  Harry Bower, a trustee from the museum, talked about the process of restoring the house and about the kinds of things they continue to learn as part of their restoration process.  Then we saw a video presentation about the artist, his life, his contemporaries, and his work.