Lightning Before the Storm 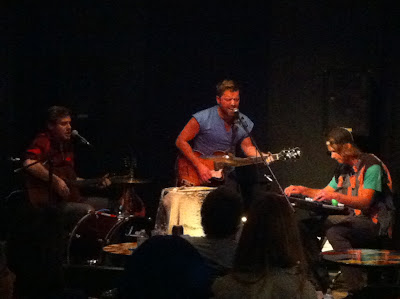 They say there's a big storm heading this way, but tonight it was still business as usual for the Belmar Arts Council.  The Boatworks hosted Lightning Jar, an Asbury Park based folk rock band known for interesting instrumental arrangements and beautiful vocal harmonies.  Pat Hutchinson sent us this photo during the show.  Looks like it was a fun time.  Information about future musical performances at the Boatworks can be found on our main website.
Posted by arrabbiata at 11:46 PM No comments:

The Mud Mural is Really Finished 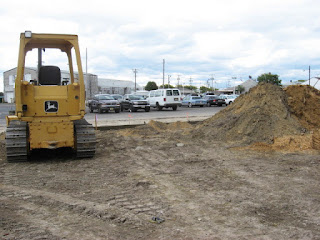 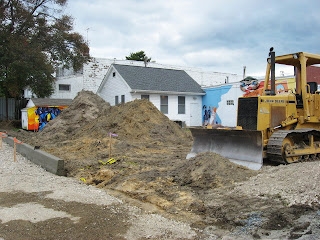 Some rain slowed down the plan a few days, but as scheduled, the mud mural was finally taken down last week.  If not for the bulldozers, there's a good chance it would be mostly down by now anyway; just a few pieces of twine were keeping it up on one side.  With all the other points of reference gone now, it's hard to say exactly where it was, but between these two photos, we're seeing the empty ground where our wall of straw, sticks, and mud once stood for well over a year.  (We did better than the straw and stick houses built by the first two little pigs, but not as well as the third house of bricks.  Perhaps if we had baked the mud first...)

It was fun while it lasted.  It involved dozens of people from the BAC and the community, and we got to experience an obscure but interesting process.  We're not likely to build another one at the Boatworks.  We'll have less unpaved ground when this construction is done, and project leader Kat Heitman has moved away to pursue graduate studies (though she has plans for more mud projects out there already).  However, if anyone does want to try a cob building project, the whole process is documented on this blog.  Just click on the words "MUD MURAL" at the bottom of this post to bring up the whole set.
Posted by arrabbiata at 11:55 PM No comments:

Anyone who has been by the Boatworks in the past few weeks has noticed big changes to the area.  First, the town of Belmar trimmed, then removed the trunks of all the trees that had marked the northern edge of our parking area, the first step in the plan to repave this little corner of our town.  Meanwhile, our mud mural was still standing, looking pretty much as it did in August. 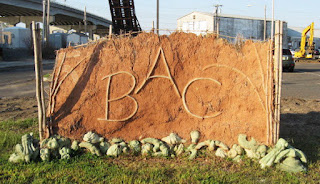 But then about a week ago we had the first major change to the wall, it started to break away from the bundled bamboo stalks that form the main vertical support on the left side.  However, despite that the weight of the whole wall is now being supported only on one end, the wall is still intact.  No big chunks have fallen out, and while some bigger cracks have formed, all the 3D elements are still where we put them.  Pretty amazing for a bunch of mud and sticks.  We knew from the beginning that this would not be a permanent addition to our site, and documenting nature's reclaiming of the materials was always part of the project, but it has lasted a lot longer than we had expected. 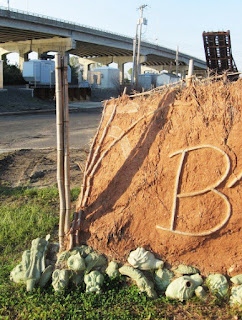 We would love to see how this plays our over the next few weeks, but it looks like we won't have the opportunity.  We've got word that this coming Monday whatever is left standing by then will be bulldozed to the ground.  So if you want to make one last visit to see our cob wall, better get there soon.
Posted by arrabbiata at 10:25 PM No comments: