Now on view at the Boatworks is an exhibition featuring artwork from the Children's Art Therapy program at Riverview Medical Center in Red Bank, NJ. The works were created by children who are dealing with varied chronic or terminal illnesses or death in their families.
The Art Therapy program provides groups free of charge for children 41/2 to 13 years old, in a safe space for children and their families to receive support, education, and healing. The work in this show ranges from puppet families to expressive self portraits and moving clay sculptures. 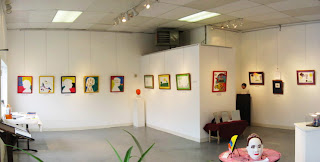 The show hopes to raise awareness of the power of creativity to heal as well as to offer insight into the needs of children and families who are dealing with loss. This work will remain on display in our front room gallery during regular hours through June 3, 2011.
Posted by arrabbiata at 7:43 PM 1 comment: 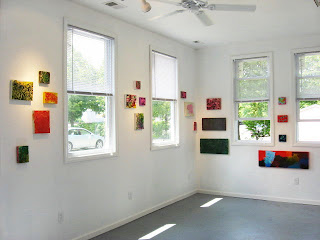 For the next couple of weeks our new addition has been transformed into a small gallery hosting an exhibition called La Joie de Couleur or Color Joy. The art was all created by the clients of the LADACIN Network, a non-profit agency whose mission is to provide education, therapeutic, social, residential, and support services for people with cerebral palsy and other physical disabilities. LADACIN serves all ages in their various programs. Much of the art shown above was created by younger children (through grade 5) employing finger painting techniques. Most of the art shown in the photos below was created by older children (through grade 12) and adults using a variety of processes. The artists were allowed to choose the size and shape of their canvas, colors, and method of applying paint. Some had specific goals, while others took a more experimental approach to creating their works. 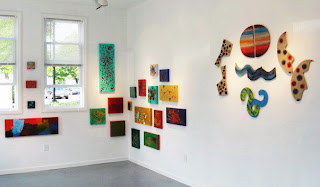 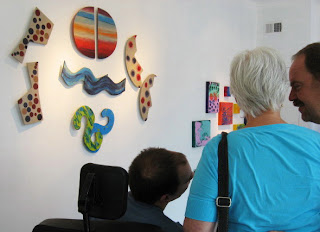 A reception for the exhibition was held this afternoon, which drew a mix of people from LADACIN (including a few of the artists) and Belmar art fans. 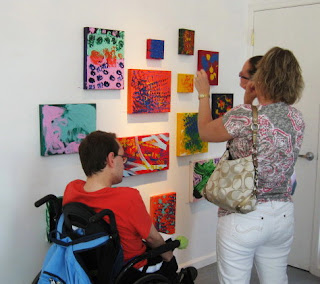 The photos don't do justice to the more than 50 brightly colored works in this show. If you feel like your life is lacking a little color, make sure to stop by the show before its closing on June 3rd, and get yourself a little color joy.
Posted by arrabbiata at 8:37 PM No comments:

The Power of Color Coming Soon 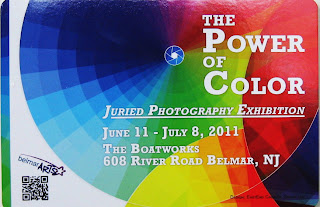 Coming up in early June will be the next juried exhibition at the Boatworks, this one devoted specifically to photography. Framed photographic works will be received on Friday, June 3rd from 5:00 to 7:00 pm and Saturday, June 4th from 10:00 am to 1:00 pm. Entry fee is $10/piece for BAC members and $15/piece for non-members, with a maximum of two entries per person. Acceptance is not guaranteed. Work will be juried by Pat Hutchinson and Michael S. Miller. Specific submission guidelines and entry form are available on the BAC main website.

There will be an opening reception for this exhibition on Saturday, June 11, 2011 from 5:00 to 7:00 pm. The show will remain on display during regular gallery hours through July 8, 2011.
Posted by arrabbiata at 9:08 PM No comments:

Noble Prose Meets in May 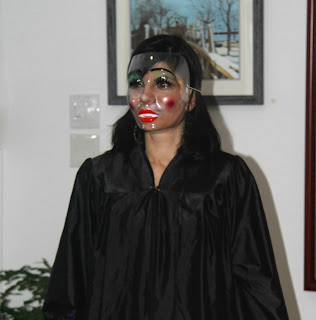 Sandy Cook reports that the BAC Noble Prose writers group held their most recent meeting on May 10th. As part of a creative writing exercise, a woman wore a costume and mask that hid her identity. Without dialogue or explanation, she acted out a sequence of events involving simple props, leaving interpretation up to the imaginations of the writers. 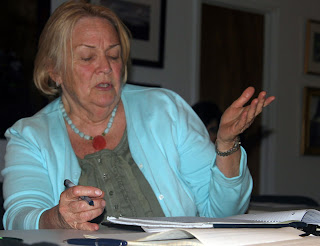 The writers created many different original and creative tales in their journals and notepads, and the photographers collaborated to produce story telling images and writing. The preliminary work was shared at the meeting and finished works will be presented at next month's session on June 14th.

For those who are interested in learning more about the Noble Prose group, information can be found on the BAC main website.
Posted by arrabbiata at 8:49 PM No comments: 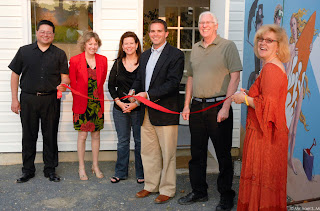 At a gala dedication party on Friday, May 13th, BAC members and donors celebrated the opening of their new "wing", a 480 square foot addition containing a new workspace/gallery and a greatly enlarged storage area, at the Boatworks. Mayor Matt Doherty cut the ribbon, officially christening the new space.

The BAC's programs have continued to grow over the past four years since the group took up residence in the former Connolly boat engine repair garage, a derelict building scheduled for demolition. With assistance from the borough, BAC volunteers restored the building to a habitable state, then went on to create the fun and funky arts center that we call the Boatworks. By 2010, demand for new classes and programs convinced BAC trustees of the need for more space. 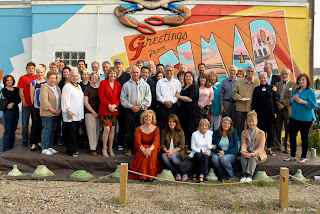 Funding for the new addition was raised from donations to the BAC's building campaign and proceeds from a fall fundraiser at Spring Lake Community Theatre. While many members stopped by over the the eight months of construction, a small core of volunteers gave consistently of their time and talents. A plaque noting the contributions of John Hutchinson, Dave Taylor, Tom Volker, Neil Scheck, Joe Villa, Michael Miller, Mike Carroll, and Jim Fitzmaurice was presented during a short ceremony following the ribbon cutting. Tom Volker paid special tribute to John Hutchinson for his design of the addition (assisted by architect Tim McCorry) and management of the project. 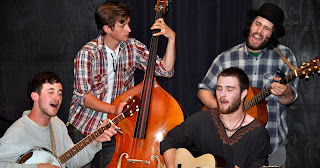 Refreshments for the evening were provided by Belmar restaurants Ragin' Cajun, D'Jais, 10th Avenue Burrito, Tulipanos, and Jersey Shore BBQ, as well as the Melting Pot in Red Bank, while BAC member and musician Matt Brown and his friends, folk/Americana band "Thomas Wesley Stern" entertained the enthusiastic crowd. The event, which raised funds for the completion of the building campaign and for new children's programming, also served as a closing reception for our recent 7th Annual Juried Art Show.
Posted by arrabbiata at 8:00 PM No comments: