The Art of Bob Ross


The current show installed at the Boatworks is called "Happy Art: An Homage to Bob Ross."  Bob Ross* is not found in art history textbooks nor his work in museums, and he passed away a few decades ago, yet he continues to be an influence on artists across generations.  Ross learned to paint landscapes using a wet into wet technique, and arguably no one ever did a better job of demonstrating this skill and process on television.  For over a decade, his shows were on the air, half hour episodes in which he always managed to turn a blank canvas into a completed landscape painting, typically heavy on mountains, bodies of water, and of course, happy little trees and clouds.  These videos are still shown frequently, around the country and around the world, his English language words never overdubbed into other languages because then viewers would lose out on the opportunity to hear his mellow soothing voice.  His presence never really went away, but right now there seems to be a resurgence, with marathons of his videos on television and celebrations of his life and art in places around the country.  This week Belmar joined that category. 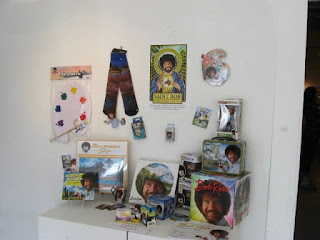 Endorsed art supplies go back to his lifetime, but merchandizing of his face and words has really picked up in recent years.  Our front room included this little Bob Ross shrine, and other items were found around the building. 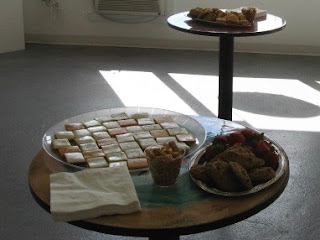 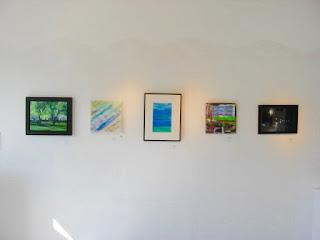 The front room gallery has over 20 works, art that has in common that it shows the influence of
Bob Ross- style, technique, subject, etc.  Perhaps even just a "happy accident', a big part of his artistic philosophy. 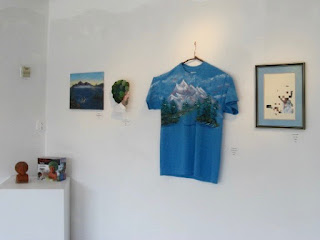 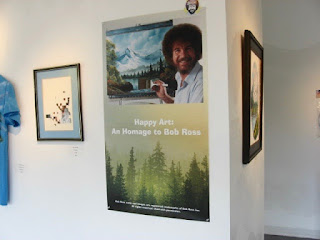 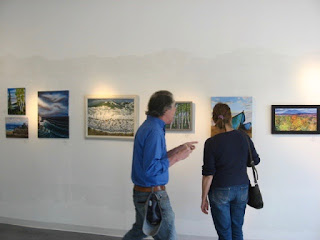 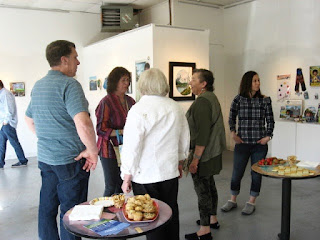 Some food on tables in the front room, but most refreshments were in the back room where we traditionally keep such things.  One unique thing for today was a tray of Bob Ross brownies.  Standard brownies but with a reproduction of the artist and his work on top. 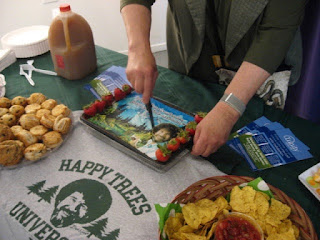 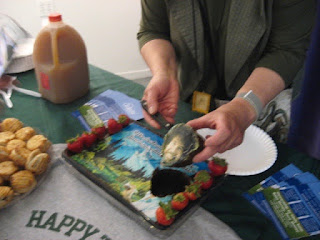 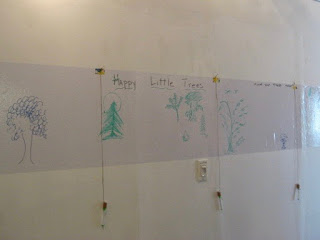 Another unique thing here today was an artist participation wall in the back, where people could add their own "happy little trees" to this group artwork.  I don't know about this idea of using markers; doesn't quite fit with the artist's typical style, but probably more practical and neater than hanging brushes full of wet oil paint. 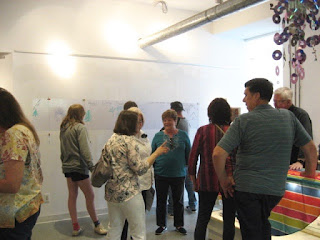 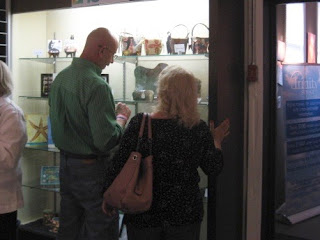 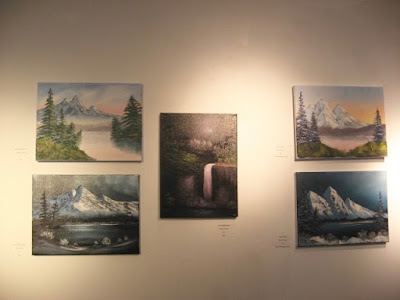 The back gallery space also features art, again over 20 pieces, but this time the main focus was on art produced in Bob Ross themed classes.  The BAC has hosted a series of Bob Ross inspired painting classes, taught by Mark Saenger CRI,  who teaches official Bob Ross style painting. Students not only learned to make one of his traditional landscape paintings, but also had the opportunity to participate in this exhibition. 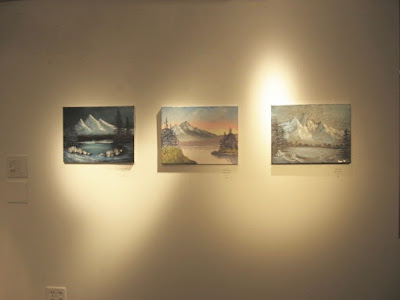 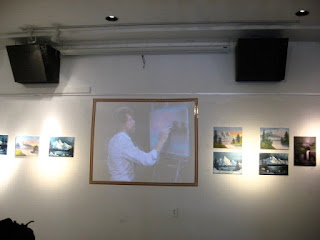 And right in the middle of the back wall there was a projection of the man himself, demonstrating one of his paintings.  It was on a loop and repeated, so if you missed part, you could catch up.  Sound turned off to not interfere with announcements, but the words don't matter much in this case- it's a visual thing.

Happy Art: An Homage to Bob Ross remains on display during regular gallery hours through June 1, 2019.  The exhibition is co-curated by Drew Leventhal and Louise Krasniewisz. Admission is free.


*the name Bob Ross and images of Bob Ross are trademarked by Bob Ross Inc.
Posted by arrabbiata at 11:31 PM No comments: