Going Back Under Water 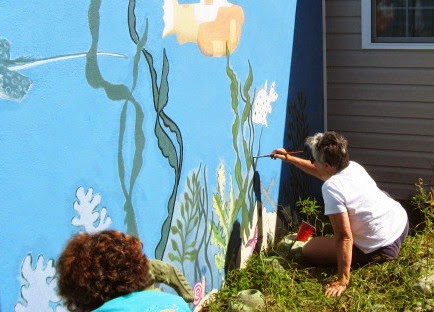 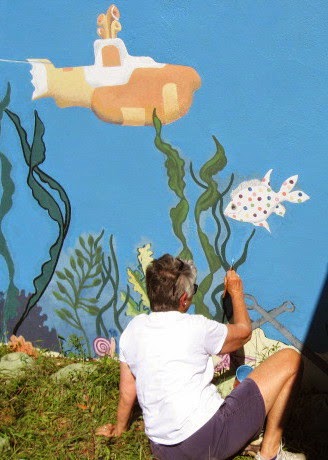 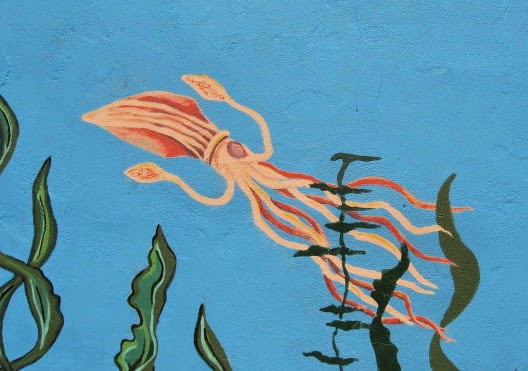 It's been months since we had a mural being worked on in Belmar, and it's late in the year to start a new one, so we're doing the next best thing- working on an old one.  It's been seven years since we finished our first mural on the side of the Boatworks, so long ago we didn't have this blog going yet, though we published highlights from that process in 2008.  Considering some of the natural disasters that have happened around these parts in recent years, it has held up surprisingly well for house paint on a concrete wall.  There has been noticeable fading (it's a broad wall facing south) and it was decided to add some new paint to bring back some of the boldness of the original look.  The underwater blue was redone last week, along with some of the mysteries of what may be found below.  Today we had more people continuing work on it, repainting plants, sea creatures, and other items.  It's a big wall (about 30' by 12') and so there is a lot of work to go.  There is no advance schedule, but if you are a member and receive the weekly newsletter, there will be reminders there when the crew will be out.  About 10 people have been part of the process so far in 2014.  If you have painting skills and don't mind climbing a ladder, we could probably use your help. 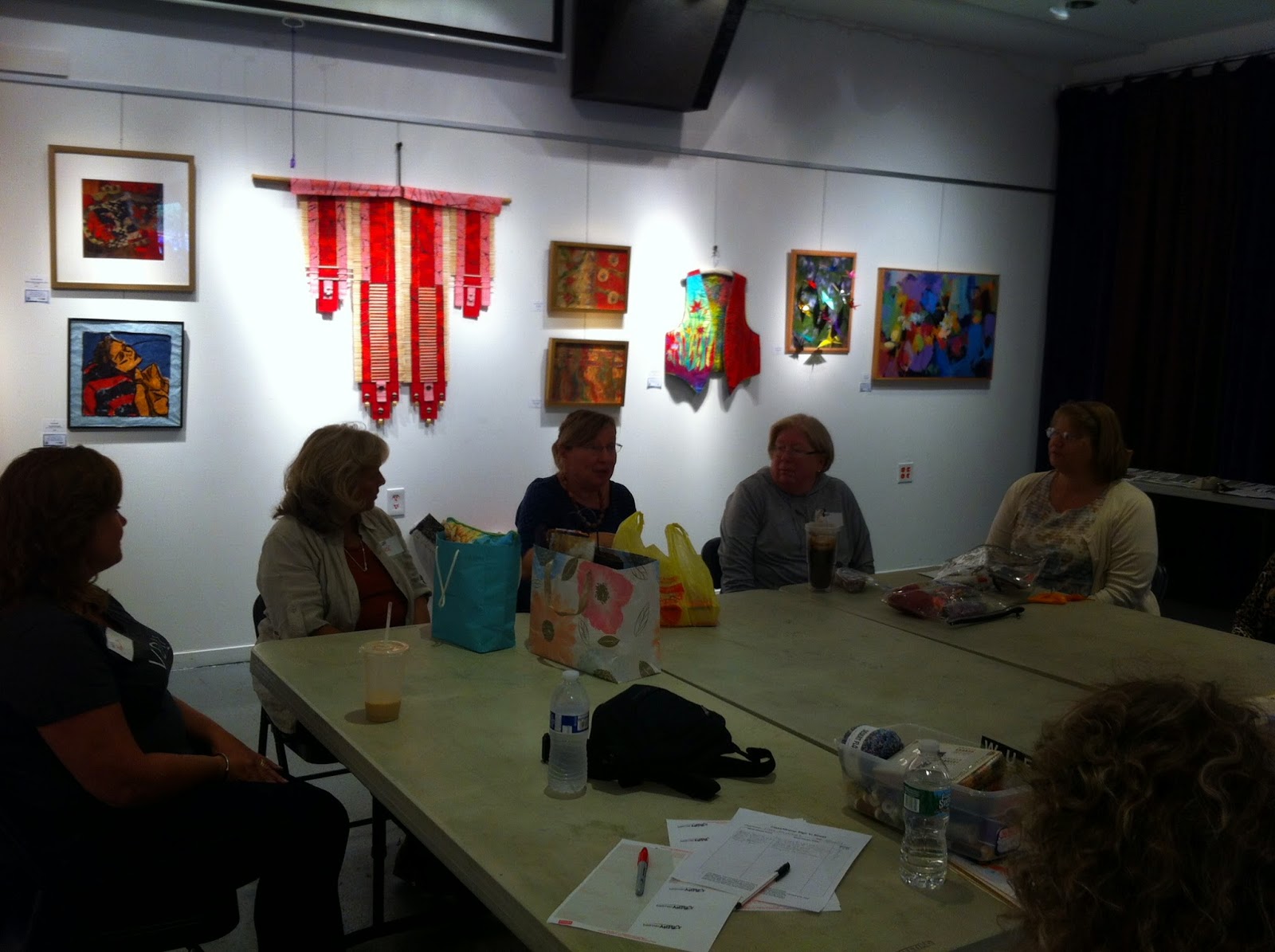 With artworks from the just concluding Fiber, Fabric, & Paper Arts show still on the walls, thirteen members of the Fiber Fridays group convened at the Boatworks today to make paper and fabric beads. 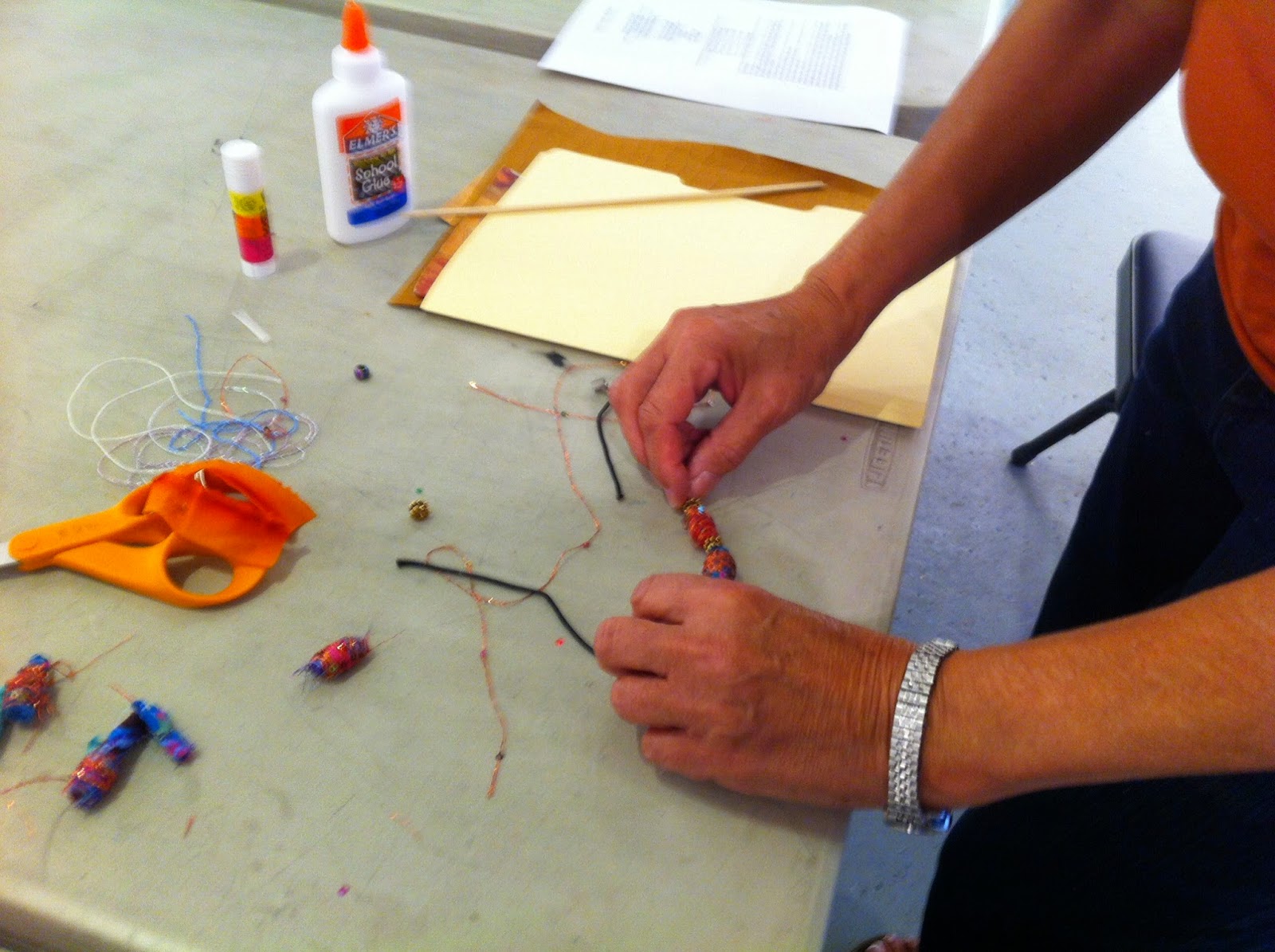 Strips of fabric and paper are wound around a wood skewer (above) and held in place with a dab of glue, then can be embellished with beads, yarn, or thread.  The resulting pieces can be used in a wide variety of projects.  Below, BelmarArts Plus member Tiffany Musser put some to use in a beautiful double strand necklace. 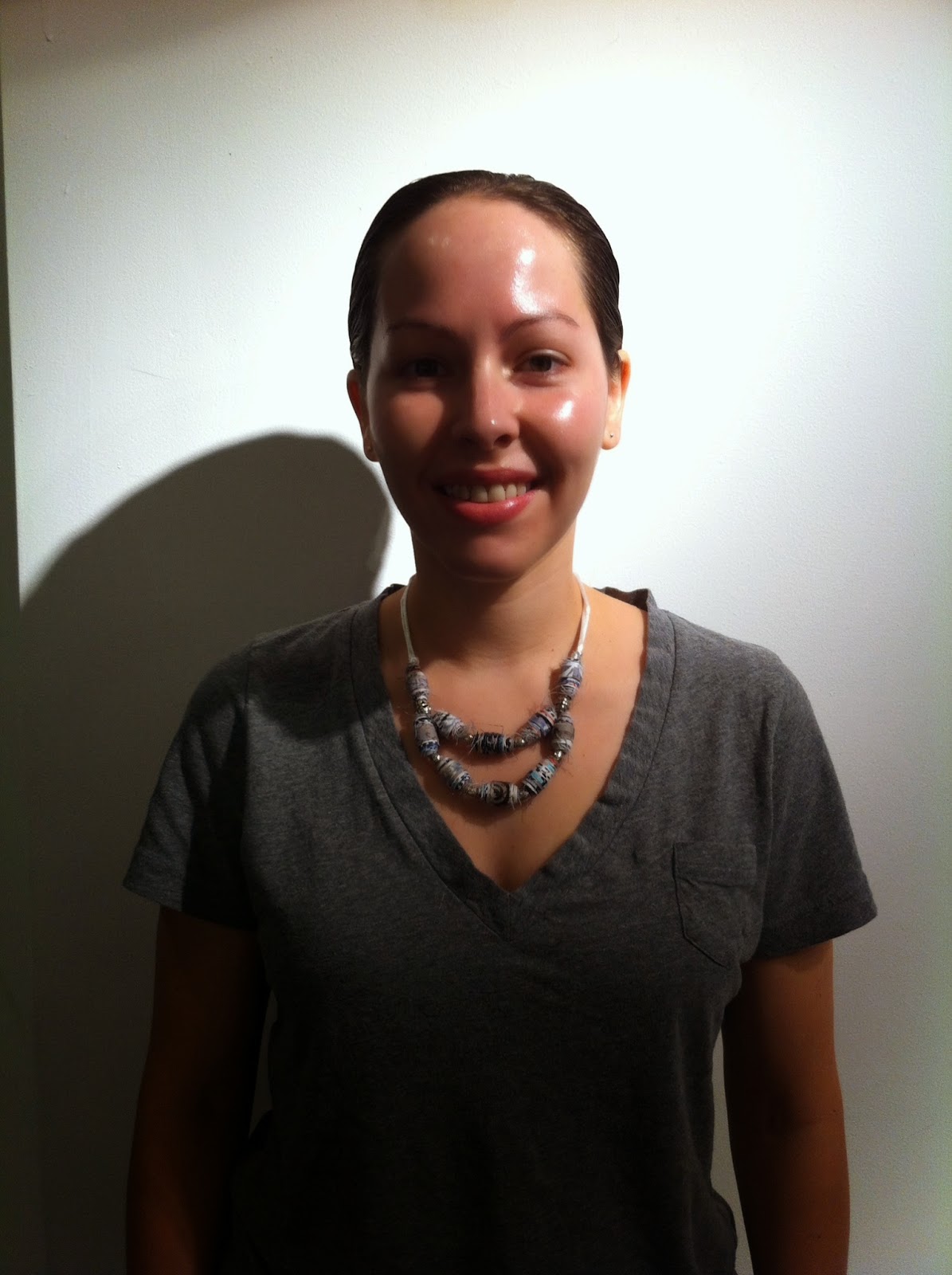 Besides the participants, several other fiber artists passed through the gallery while picking up their works from the recent show, and were reportedly sorry they couldn't stay to make some themselves.  The best way to avoid that kind of problem is to plan ahead and show up on time to the next meeting, November 21st, from 12:30 to 2:30.  Medium and process to be determined.

Posted by arrabbiata at 10:17 PM No comments: 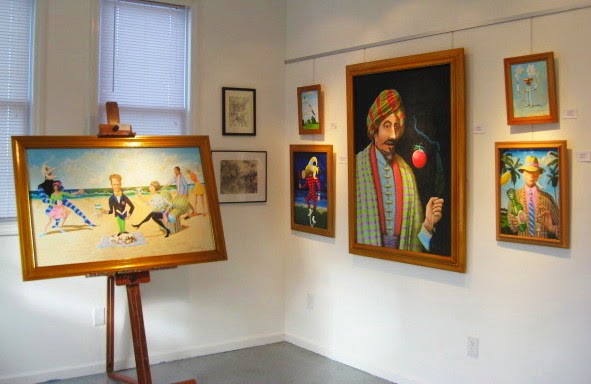 Today the Boatworks hosted Bob Steeler's Solo Art Exhibition.  Bob is probably best known as a musician, having served as the drummer for the well known band Hot Tuna for several years.  When there was interest in bringing him in to perform, he told us he was concentrating on the visual arts now, and he wasn't kidding.  He has an established career as a painter and sculptor in the New York/New Jersey region, describing his current painting style as a form of absurd surrealism.   So he was invited to be here as a visual artist, and our side room gallery is currently filled with his art.  Above and below are some photos of the space. 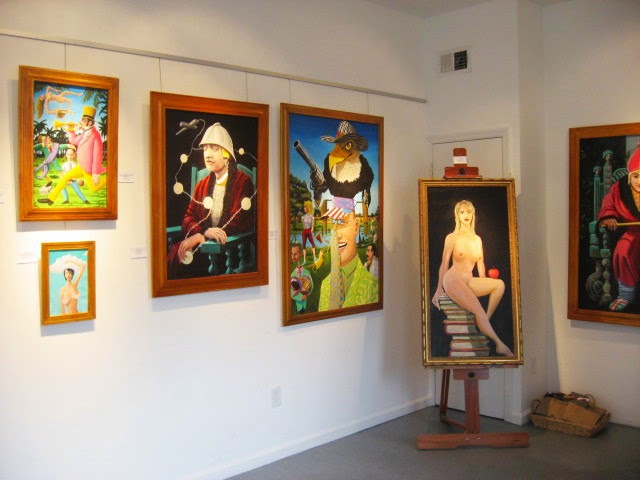 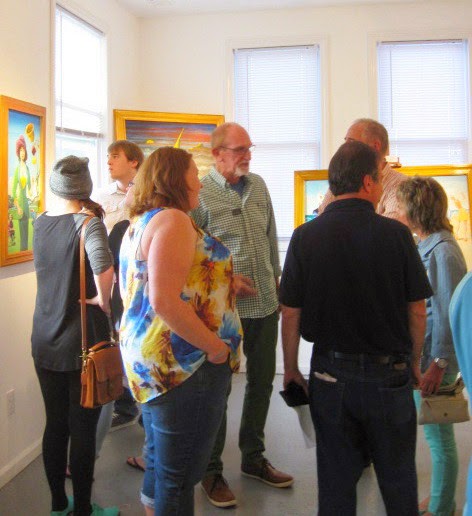 As with most shows, attendance at the opening reception started with just a few people and then built up into a crowd.  The official door count was over 80 visitors, not including the BAC regulars there to run the reception.  Bob Steeler is the tall man in the center of the above photo, and his art gave viewers much to talk to him about. 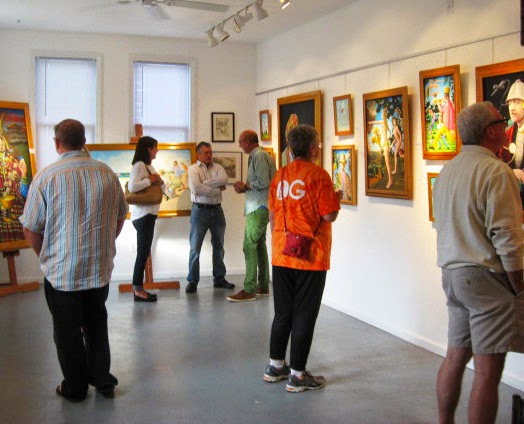 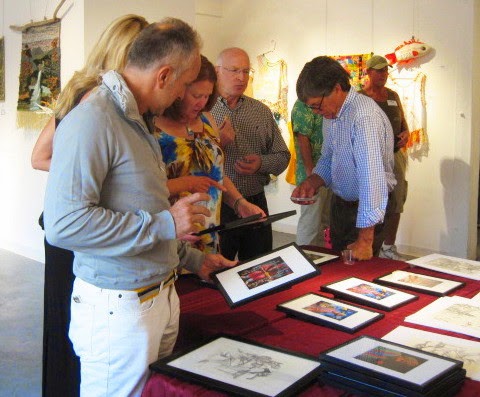 The artist's paintings are for sale, and a few originals have already been sold, but also available were a variety of small reproductions of his paintings and drawings. 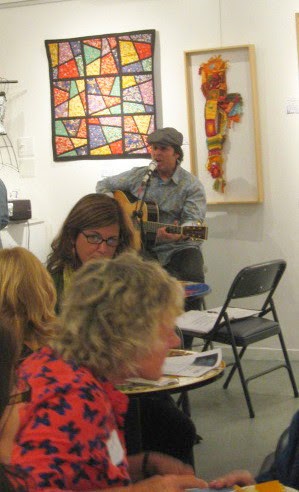 Like most of our receptions, we had the usual wine and cheese refreshments, and live background music, today provided by area musician Chris Turner.   Combined with the beautiful sunny day it made for a pleasant late afternoon. 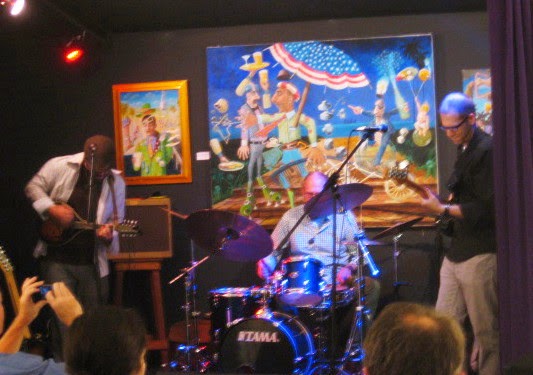 After the reception officially ended and all the visual arts discussions were over, it was time for music.  Were we going to have Bob Steeler in for an event and not have him perform?  Not if we could help it. Word is that the Bob Steeler Band is a work in progress, but to those of us at the Boatworks, they sounded just fine.

The Bob Steeler exhibition will continue in our side gallery through October 17, 2014, running along side the Fiber, Fabric, and Paper Arts show for the next week, then along with the upcoming Grass Roots show featuring art from participants in 2014 BelmarArts classes and workshops starting October 4th.  Details are available on our main website.  Admission is free.
Posted by arrabbiata at 11:57 PM No comments: